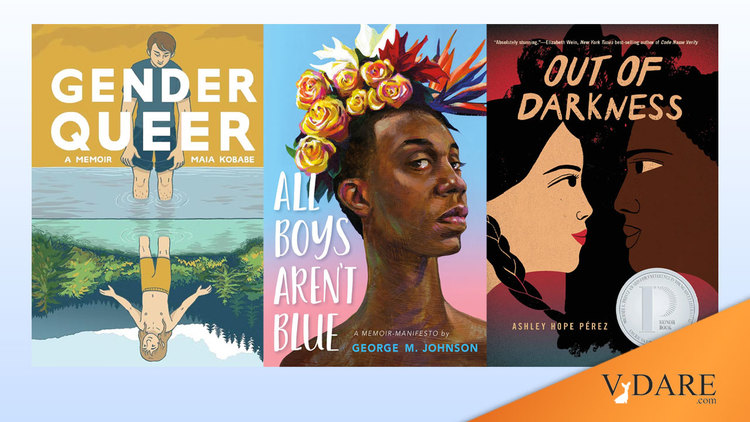 CBS News’s list of The 50 most banned books in America [Jennifer Martin, November 10, 2022] contains, because of what the Supreme Court did to the obscenity laws, exactly no banned books.

The library organizations who believe that this kind of propaganda should be pushed on children, using tax dollars, in local public schools, frequently call them “Banned or Challenged” books.

Another 15 are about the wonderfulness of being wildly sexually active as a teen. Here we’re talking about the normal kind of sex, that produces teen pregnancy.  A couple are anti-“slut shaming,” which means basically that they’re pro-slut. These are tagged YAYTEENSEX.

I suspect Killing Mr. Griffin, a bit of an outlier, may have been banned at the instance of the teachers, since it’s about “teenagers kidnapping and murdering their strict teacher.” Some of the books are actually pornographic.

Gender Queer: A Memoir is about underage gay sex with illustrations. (See somewhat blurred images here, if you’re over 18 yourself.) These are cartoons showing oral sex, genitals and so on of teens going at it, and if they were photographs, everybody involved in making them or printing them would go to jail.

50.”And Tango Makes Three,” by Justin Richardson and Peter Parnell OKGAY
49. ”Stamped: Racism, Antiracism, and You,” by Ibram X. Kendi and Jason Reynolds WHITESAREEVIL
48. ”The Infinite Moment of Us,” by Lauren Myracle YAYTEENSEX
47. ”Two Boys Kissing,” by David Levithan OKGAY
46. ”How to Be an Antiracist,” by Ibram X. Kendi WHITESAREEVIL
45. ”I Am Jazz,” by Jazz Jennings and Jessica Herthel OKTRANS
44. ”We Are the Ants,” by Shaun David Hutchinson OKGAY
43. ”Killing Mr. Griffin,” by Lois Duncan “This suspense novel, published in 1978, is about teenagers kidnapping and murdering their strict teacher” YAYKILLINGTEACHERS
42. ”Lucky,” by Alice Sebold REAL LIFE FALSE RAPE
41. ”The Truth About Alice,” by Jennifer Mathieu YAYTEENSEX
40. ”Real Live Boyfriends: Yes. Boyfriends, Plural. If My Life Weren’t Complicated, I Wouldn’t Be Ruby Oliver,” by E. Lockhart YAYTEENSEX
39. ”Almost Perfect,” by Brian Katcher OKTRANS
38. ”Being Jazz: My Life as a (Transgender) Teen,” by Jazz Jennings OKTRANS
37. ”Speak,” by Laurie Halse Anderson RAPE
36. ”Dear Martin,” by Nic Stone WHITESAREEVIL
35. ”The 57 Bus: A True Story of Two Teenagers and the Crime That Changed Their Lives,” by Dashka Slater OKTRANS, WHITESAREEVIL
34. ”Sold,” by Patricia McCormick PORNOGRAPHY THIRDWORLDSLAVERY
33. ”A Court of Mist and Fury,” by Sarah J. Maas PORNOGRAPHY
32. ”Monday’s Not Coming,” by Tiffany D. Jackson WHITESAREEVIL
31. ”It’s Perfectly Normal: Changing Bodies, Growing Up, Sex and Sexual Health,” by Robie Harris PORNOGRAPHY
30. ”Extremely Loud & Incredibly Close,” by Jonathan Safran Foer PORNOGRAPHY A precocious nine-year-old explains what he found out about sex on the internet: “Everything I do know I had to teach myself on the Internet, because I don’t have anyone to ask. For example, I know that you give someone a blowjob…” Of course, what this controversy is about is having all this information in the school library, in book form—available to nine-year-olds.
29. ”More Happy Than Not,” by Adam Silvera OKGAY
28. ”Tricks,” by Ellen Hopkins YAYTEENSEX, CHRISTOPHOBIC, OKGAY
27. ”The Perks of Being a Wallflower,” by Stephen Chbosky YAYTEENSEX, OKGAY
26. ”All American Boys,” by Jason Reynolds and Brendan Kiely WHITESAREEVIL
25. ”Nineteen Minutes,” by Jodi Picoult SCHOOL SHOOTING
24. ”The Breakaways,” by Cathy G. Johnson YAYTEENSEX, WHITESAREEVIL
23. ”Fun Home: A Family Tragicomic,” by Alison Bechdel OKGAY
22. ”The Handmaid’s Tale,” by Margaret Atwood CHRISTOPHOBIC
21. ”Jack of Hearts (And Other Parts),” by L. C. Rosen YAYTEENSEX
20. ”Flamer,” by Mike Curato OKGAY
19. ”Drama: A Graphic Novel,” by Raina Telgemeier OKGAY
18. ”This One Summer,” by Jillian Tamaki and Mariko Tamaki YAYTEENSEX
17. ”Beloved,” by Toni Morrison YAYTEENSEX (WITH ANIMALS)
16. ”Beyond Magenta: Transgender Teens Speak Out,” by Susan Kuklin OKTRANS
15. ”Looking For Alaska,” by John Green YAYTEENSEX
14. ”Melissa (George),” by Alex Gino OKTRANS
13. ”This Book is Gay,” by Juno Dawson OKGAY
12. ”l8r, g8r,” by Lauren Myracle YAYTEENSEX
11. ”The Kite Runner,” by Khaled Hosseini HOMOSEXUAL RAPE
10. ”Crank,” by Ellen Hopkins YAYTEENSEX, CRYSTAL METH
9. ”Thirteen Reasons Why,” by Jay Asher YAYTEENSEX, SUICIDE
8. ”Me and Earl and the Dying Girl,” by Jesse Andrews YAYTEENSEX
7. ”The Absolutely True Diary of a Part-Time Indian,” by Sherman Alexie WHITESAREEVIL
6. ”The Hate U Give,” by Angie Thomas WHITESAREEVIL
5. ”The Lawn Boy,” by Jonathan Evison OKGAY
4. ”The Bluest Eye,” by Toni Morrison WHITESAREEVIL
3. ”Out of Darkness,” by Ashley Hope Pérez YAYTEENSEX WHITESAREEVIL
2. ”All Boys Aren’t Blue,” by George M. Johnson OKGAY
1. ”Gender Queer: A Memoir,” by Maia Kobabe OKGAY, OKTRANS. PORNOGRAPHY