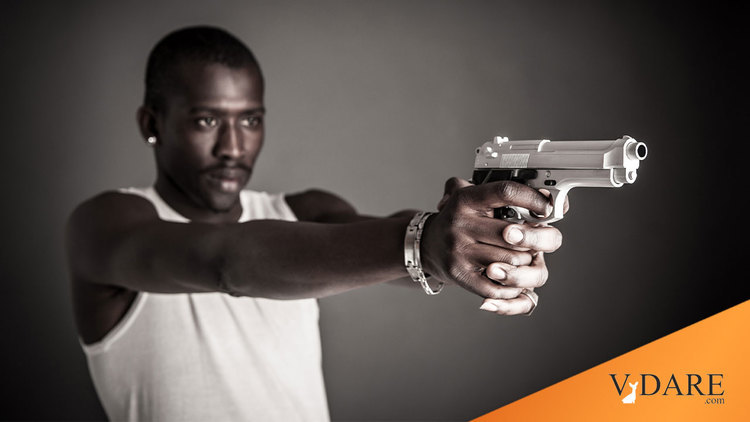 97% Of Detroit Concealed Weapon Arrests Are Of Blacks, So Black Advocates Want All Charges Dropped

Again, we aren’t far away from seeing it just be made illegal to arrest black people.

Because of racial disparity or racial equity…or something.

Since the start of the pandemic, arrests for carrying a concealed weapon (CCW) have soared in Detroit. Before the COVID-19 pandemic, CCW arrests were fewer than 400 per quarter, but that number steeply climbed through the second quarter of 2020 — reaching about 1,400 by the third quarter. It now stands at 1,017, according to data a coalition of activists and defense attorneys presented in a news conference Wednesday.

Beyond this surge in CCW arrests is an overwhelming disparity in the race of those arrested for nonviolent weapons charges. Data analyzed by the coalition found that 97% of people arrested for carrying a concealed weapon in Detroit — a majority-Black city, 77% according to the 2020 census — since the beginning of the pandemic were Black.

“We noticed that the majority of the people who were being arrested were Black people, and we saw this trend continue as time passed,” said Chantá Parker, managing director of the Neighborhood Defender Service, which provides criminal defense representation for people who cannot afford to hire legal representation. “As the pandemic raged on, alarm bells went off for us, we thought, ‘Hey, this is a crisis,’ and what we’ve discovered is that it was a crisis of policing and prosecution.

“We believe this is an unjust practice that’s destroying the lives of Black Detroiters and it must stop.”

The majority of people, 70%, arrested for carrying a concealed weapon — a five-year felony — legally owned their guns and were instead accused of improperly storing their guns while driving. Michigan is an open-carry state, but the definition of what constitutes “open” is often misunderstood.

In an annual review of crime statistics Thursday, Detroit Police Chief James White said that homicides and nonfatal shootings saw a decrease in 2021 of 4% and 9%, respectively. Further, DPD was able to recover 7,869 firearms using the Regional Central Gun Intelligence Center, a tracking system that allows for gun tracking across multiple incidents and jurisdictions.

“That likely resulted in a number of people not meeting their demise,” White said Thursday. “Getting 7,000 guns off the street there’s likely a large number of funerals that did not happen.”

Because black individuals collectively commit a disproportionate amount of crime, the standards once governing our society must be abandoned.

Just drop all charges against blacks for not only these crimes in Detroit, but every crime individual blacks have committed in America. Call it Emmett Till Immunity.