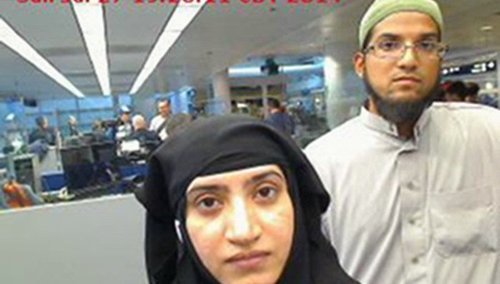 (New York, NY) December 7th, 2015, — Donald J. Trump is calling for a total and complete shutdown of Muslims entering the United States until our country’s representatives can figure out what is going on.

So, let me offer a small proposal for one thing that obviously needs reform.

One thing that’s become apparent from San Bernardino is that our government’s system for assessing spousal immigrants is broken.

And it’s not just letting in the Shooter Bride. We now know that the Shooter Groom’s gun-supplying buddy Enrique Marquez was in an immigration fraud fake marriage. From the New York Times:

… He converted to Islam and attended some of the same mosques as the Farook family. When Mr. Farook’s older brother, Raheel, married a Russian woman named Tatiana Gigliotti, Mr. Marquez was one of the witnesses. The other was Mr. Farook.

Last year, Mr. Marquez married the Russian sister of Raheel Farook’s wife. He later told a friend and people at the bar that it was a sham marriage for immigration purposes. He told bar patrons he had been paid $5,000 or $10,000 to marry Ms. Gigliotti’s sister, Mariya Chernykh. …

He told Mr. Rodriguez that he had posted photographs of himself and his wife for the sake of appearances, but that Ms. Chernykh lived at her own apartment and would not so much as kiss him.

Is the other Farook brother’s marriage to the other Russian sister real? Or is it fake too? And why didn’t the father of Mrs. Marquez’s anchor baby, Oscar Romero, marry her instead to get her a visa? Is he an illegal immigrant too?

One of my commenters said you can’t blame government immigration officials for making bad decisions about spouses because they are given so little time to investigate and ponder who to let into the country permanently. Other commenters have suggested there is a massive number of sham marriages for purposes of immigration fraud.

Okay, so here’s a proposal: let’s increase the budget. Hire more and better immigration officials and give them more time and money to do careful investigations.

How much? I don’t know, but here are few examples to put things in perspective: How much do colleges spend on their admissions departments? How much do NFL teams spend scouting who to draft? How much time is devoted by Americans to picking their Fantasy Football rosters? Something that’s clear about 21st Century organizations is that selection matters, but that lesson never seems to get applied to thinking about immigration policy, where schmaltzy sentiment reigns instead.

This reform won’t solve all the immigration problems. But it’s a more constructive proposal than seemingly anything all the people in positions of power and influence who are enraged at Donald Trump have put forward this week in response.