Ann Corcoran Asks: Is The Heritage Foundation Selling You Out On UN/US Refugee Admissions Policy? Probably!

Is the Heritage Foundation selling you out on UN/US Refugee Admissions Policy? 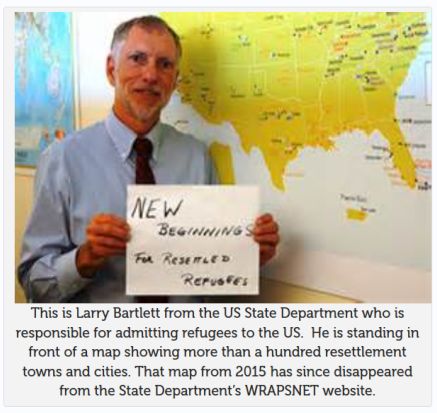 On the morning we are getting news that the President is selling out American workers and sacrificing the safety of US citizens by soft talk on the border wall and DACA, we see this announcement.

First, readers may remember that the Heritage Foundation published a dreadful report, here, on the Refugee program demonstrating a total disconnect from what is happening in communities where refugees are secretly dropped off, and now this….

Here (below) we have a panel of bureaucrats and policy wonks who will discuss a bunch of esoteric BS in the Washington swamp about “reforming” the program.  I don’t see one serious critic on the panel and not one person who knows what is happening in communities where the refugees are placed.

There are several very very good spokesmen for our point of view in Washington who could get over to the Heritage Foundation in a heartbeat—at FAIR, at the Center for Immigration Studies and at NumbersUSA—why isn’t one serious critic of the program on the panel?

These people will suggest tinkering, or worse!

And, to top it off the program is headlined by Larry Bartlett, pro-refugee bureaucrat extraordinaire.   Just two of many posts on Bartlett you should review are here and here.

In the first post Bartlett went to Twin Falls, Idaho and told the audience a whopper—that they don’t place refugees in communities that don’t want them—and he went on to say that was not because of sympathy for the townspeople, but for the refugees (he feared for them, that some local yokels might hurt them!) (go here for more).