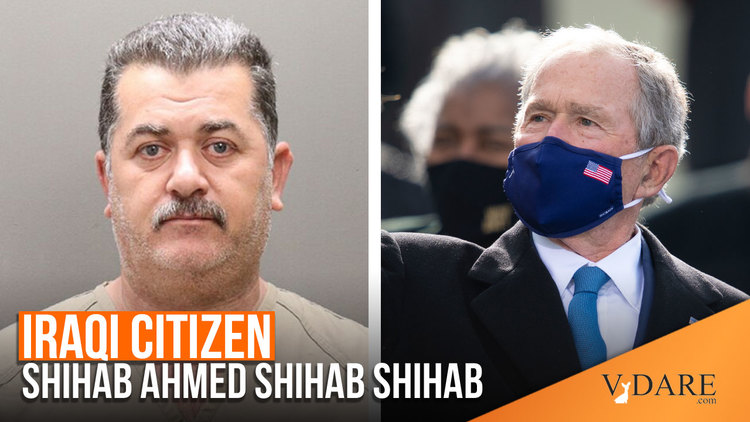 Another Day, Another Immigrant Plot To Assassinate Bush 43

From the Justice Department: An “Iraqi citizen living in Columbus, Ohio, has been charged federally with an immigration crime and with aiding and abetting a plot to murder former United States President George W. Bush.” The would-be assassin is Shihab Ahhemd Shihab Shihab, 52. He’s at least the second Muslim foreigner to plot to murder Bush. The arrest invites the obvious question: Why was this “Iraqi citizen” living in Columbus?

He was “seeking asylum,”the release from Justice continues:

Shihab originally entered the United States in September 2020 on a visitor visa, and in March 2021, he filed a claim for asylum with United States citizenship, which is pending review. He lived in both Columbus, Ohio, and Indianapolis and worked at markets and restaurants in both cities.

An Iraqi man behind bars following his arrest on a charge of plotting to assassinate former President George W. Bush has waived his right to a detention hearing and will remain behind bars for now #terrorism https://t.co/tjpFyE5gbz

Note that the Justice Department uses the same descriptor as the communist Mainstream Media when they report these cases: “Ohio Man.”

Shihab rightly thought that smuggling accomplices across the border with Mexico was possible: “Shihab exchanged money with others in an attempt to illegally bring foreign nationals to the United States,” the department continued:

For example, in August 2021, Shihab allegedly intended to help who he thought was another Iraqi citizen enter the United States for a fee of $40,000. Shihab provided specific instructions on how he would smuggle the person into the United States after 60 days. In October and December 2021, Shihab accepted tens of thousands of dollars for the purported smuggling. In reality, the individual was fictitious, and the interaction was coordinated under the direction of the FBI. …

The border is wide open, and the Biden Regime has released almost 1 million illegal-alien colonists to settle down here. Smuggling a few swarthy Iraqis across the border would have been easy. They could probably pass for Hispanics, and with credible fake ID, the regime might release them.

Count on more Shihabs to surface as the 70,000 Afghans whom Biden imported start raping, murdering, and yes, plotting assassinations. Heaven knows how many fuming Afghans anxiously await the chance to exact revenge for what the United States did in and to their country.

Anyway, before Shihab, there was Khalid Ali-M Aldawsari, convicted in 2012 and sent to prison for life. One of 10,000 Saudis who received student visas in 2008, he had planned to kill Bush with a bomb. The DOJ called him "Texas Resident" and ABC called him a Texas student.

Before that, in 2005, there was Ahmed Omar Abu Ali. The press called him "a Virginian."