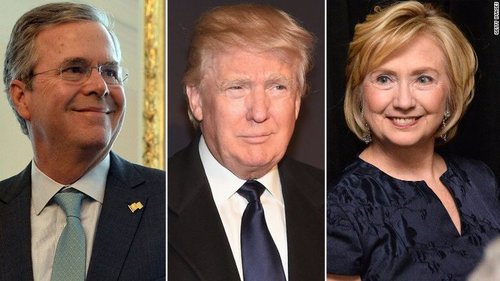 In a somewhat amusing article by Nancy Benac of the Associated Press,  the writer laments the "struggle" of Jeb and Hillary to keep the narrative focused on what they want to talk about.

I mean, it must be frustrating being  the designated front-runner and having other people set the  agenda, or having reporters asking about things you don't want brought up.

It wasn't supposed to be this way.  Nearly six months out from the first votes of a presidential campaign, candidates should be fleshing out who they are and what they stand for. Instead, some of the best-known 2016 candidates are toting heavy baggage that's proving to be a big distraction from the conversations they'd rather be having with the American people. Top 2016 candidates struggle to change the subject  Nancy Benac, AP, April 22, 2015

Well, boo-hoo.  Note also that Jeb is still referred to as a "top candidate" even though he's not leading in the polls.  But you see, he is the Establishment's Designated Candidate.

Like it or not, Hillary Rodham Clinton's still forced to talk about her email.

And Jeb Bush is still trying to distinguish himself from his famous brother and father.

And so the Bush family psychodrama is supposed to influence the way we vote?

Donald Trump, meanwhile, is stoking flames over immigration policy that are fueling his campaign for now but also risk consuming it. And other Republican candidates are finding their own messages knocked off-kilter as they're forced to respond to Trump's ideas.

If the Mainstream Media and the Republican and Democratic party leaders had their way, nobody would be questioning our immigration policy.

The current distractions for Clinton and Bush are inevitable to some extent but also partly their own making.  For two such well-known candidates, the getting-to-know-you phase of the campaign requires a healthy dose of new ideas, says GOP pollster David Winston.  Absent something new, "the story line tends to drift to the negative," says Winston, and that trend is particularly pronounced in a time of general voter dissatisfaction with political discourse and the direction of the country. Neither candidate was able to keep from drifting off course, he says.

Well, there are other candidates, aren't there?

Once news emerged early on that Clinton had used a private email account and server as secretary of state, the not-yet-announced candidate knew she'd have to deal with the consequences. But her campaign miscalculated the staying power of the issue and the various investigations it would spawn.  Clinton's low-key campaign launch, in which she did more listening than talking, didn't do anything to quell the swirling controversy. And her subsequent attempts to change the subject to topics like her economic and education proposals came too late to contain the damage.   Now, the clearly frustrated candidate is trying everything from humor to fact-checks to put the issue to rest. She's blaming government bureaucrats, GOP enemies and fixated reporters for what her campaign insists is an overblown emphasis on the matter.

A somewhat cocky Clinton joked during a speech earlier this month about getting a Snapchat account, saying, "I love it. Those messages disappear all by themselves."  Four days later, pressed on the email issue by reporters in Las Vegas, Clinton threw up her arms and declared, "Nobody talks to me about it other than you guys."

Dan Schnur, director of the University of Southern California's political institute, says Clinton seemed to be relying, at least initially, on an old playbook.  "The lesson that the Clintons learned in the 1990s is that it's not necessary to immediately make all information available, and if you wait long enough, the tables eventually turn," Schnur said. "So even if there are a lot of smart people sitting at her campaign table telling her otherwise, human nature is going to influence her to try to duplicate a past success."

You probably needn't worry much about Hillary.  She and Bill have been getting away with stuff for years, and she probably will this time also.

Now for the Jeb Bush psychodrama.

Bush, for his part, knew from the beginning that he'd need to distinguish himself from his father and brother's presidencies.  He had an I-am-my-own-man answer practiced and ready to go.   Yet he still managed to fumble questions about whether he'd have invaded Iraq as his brother did. And his turns of phrase about "evil-doers" and the burdens of presidential decision-making clearly echo those of his brother George W. Bush, undercutting his efforts to distinguish himself.

I'd just as soon not have another Bush in the White House.  Then the family can hash all this out at Kennebunkport and leave the rest of us alone.

In both Clinton and Bush's cases, says Schnur, no matter how hard campaigns try to anticipate challenges and be ready for them, "It always sounds better at campaign headquarters than it does out on the trail."  "It's not that hard to sit in a conference room and strategize about how to handle a potential problem," Schur said. "The problem is the other candidates and the media and the voters don't always react to that strategy the way you want them to."

Both Jeb and Hillary thought they were the Designated Candidates and this was Their Time.   But others just haven't cooperated.   It must be so frustrating.

While Clinton and Bush keep trying out new tactics to stow their unwanted baggage, Trump shows no inclination to move past the political flashpoint of immigration, even though some of his comments have been criticized by Republicans as well as Democrats.   Trump seems happy to tap into a subset of voter disquiet, and to force GOP rivals to take a stand on proposals such as his call for a giant wall on the southern border and to deny automatic "birthright citizenship" to anyone born in the U.S.

Trump is bringing up important issues and policies  which the media and bipartisan political establishment don't want questioned.   And, yes, Trump has "forced" others "to take a stand".  That's what a leader does , he forces others to make difficult decisions.

For now, that's helping him [Trump] "ride a wave having to do with his chutzpah," says University of Texas political scientist Bruce Buchanan. But ultimately, Buchanan says, it could be a big problem for his candidacy and Republicans overall.

Hmm, and according to Bruce (not Pat) Buchanan, why is that?

You can bet the party that vowed to make nice with Hispanics after the GOP's poor showing with Latino voters in 2012 didn't aim for its candidates to spend August talking about "anchor babies."

Here we go again, with the "Hispanic Vote" propaganda.  How many times have we heard this before?    And by the way, the majority of those polled favor abolishing the anchor baby loophole. So who is out of step?

For all of the candidates, much of what's being talked about in August 2015 could well be largely forgotten by the time people cast votes next year.

Maybe, but then again, maybe not.

But this summertime chatter is sure to contribute to the overall impressions of candidates that voters are developing.  "It's shaping the context for how voters make their decisions," says Winston. "You don't want the initial thought in everybody's mind to be, "'Wow, they have a lot of baggage.'"