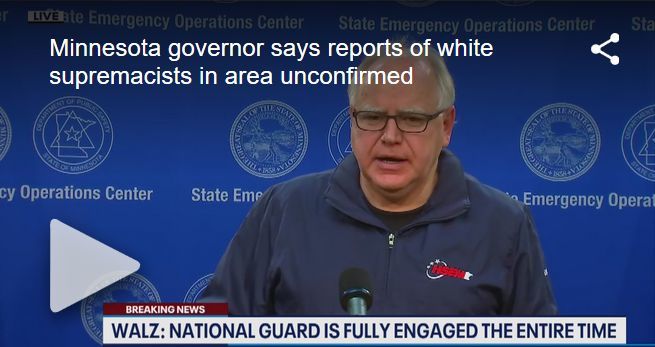 From Fox9 in Minneapolis:

Minnesota Gov. Tim Walz and Public Safety Commissioner John Harrington said they have received information from national sources about white supremacists and drug cartels in the area of unrest in the Twin Cities, but at this moment, those reports are unconfirmed.

MINNEAPOLIS (FOX 9) – Minnesota Gov. Tim Walz says he suspects white supremacist groups and drug cartels are carrying out some of the violence in Minneapolis, but cannot confirm it at this time.

The video is pretty funny. Governor Walz just gets up to about 250 words per minute without appearing to have any idea how he’s going to end his sentences.

But at least he’s not a conspiracy theorist!

To be clear I support the protests but this is not okay.