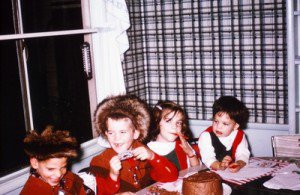 I’ve been to Arcadia, California, a non-descript but pleasant suburb of Los Angeles a few miles east of Pasadena, at least 100 times for family parties. 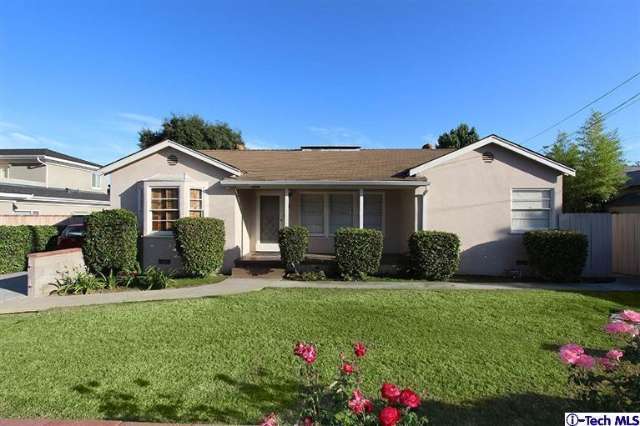 Not their house, but close in size

The picture above was taken in my relatives’ c. 1800 sq. ft. house in Arcadia during one of the recurrent Davey Crockett manias. I’m guessing it’s my birthday in 1965 but I could be off by a couple of years. The picture at the right from a real estate website is of somebody else’s house, but it gives you a good sense of what Arcadia’s housing stock looked like before Chinese Money started pouring in about a quarter of a century ago.

Arcadia is currently in the news because the amount of Chinese dubious money cascading in to tear down small houses like my late aunt’s and put up feng shui mansions has reached a crescendo. From Bloomberg News:

A year ago the property would have gone for $1.3 million, but Arcadia is booming. Residents have become used to postcards offering immediate, all-cash deals for their property and watching as 8,000-square-foot homes go up next door to their modest split levels. For buyers from mainland China, Arcadia offers excellent schools, large lots with lenient building codes, and a place to park their money beyond the reach of the Chinese government.

The Chinese government isn’t going to go Maoist again and take away all the capitalists’ property. Periodically, however, there are anti-corruption campaigns in China, so owning a huge house on a small lot in Arcadia is a way to launder money.

Why Arcadia, though, which always struck me down through the decades as a generic suburb? My aunt’s house, for example, was about 1600 square feet, but then they added on to get it up to maybe 2000 or a little more for their family of five. But the lot is tiny, maybe 6,000 square feet.

One reason that doesn’t get mentioned much is that it’s right next to the Santa Anita racetrack and the Chinese tend to be fanatical gamblers. Back in the 1990s, a sportscaster friend used to host a small TV show about horse racing at Santa Anita, which completely failed to make him a local celebrity in his own neighborhood. But when he’d go to Las Vegas, Chinese tourists would ask to have their picture taken with him because his talk show was Huge in Hong Kong.

Another reason is that Arcadia is on flat ground, whereas affluent white people in Southern California prefer hillier suburbs like nearby Sierra Madre where my uncle lived back in the 1960s.

Also, the San Gabriel Valley used to be smoggy, but Chinese immigrants didn’t exercise outside, so they didn’t care.

The city, population 57,600, projects that about 150 older homes—53 percent more than normal—will be torn down this year and replaced with mansions. The deals happen fast and are rarely listed publicly. Often, the first indication that a megahouse is coming next door is when the lawn turns brown. That means the neighbor has stopped watering and green construction netting is about to go up.

This flood of money, arriving from China despite strict currency controls, has helped the city build a $20 million high school performing arts center and the local Mercedes dealership expand. “Thank God for them coming over here,” says Peggy Fong Chen, a broker in Arcadia for many years. “They saved our recession.” The new residents are from China’s rising millionaire class—entrepreneurs who’ve made fortunes building railroads in Tibet, converting bioenergy in Beijing, and developing real estate in Chongqing. One co-owner of a $6.5 million house is a 19-year-old college student, the daughter of the chief executive of a company the state controls.

Arcadia is a concentrated version of what’s happening across the U.S. The Hurun Report, a magazine in Shanghai about China’s wealthy elite, estimates that almost two-thirds of the country’s millionaires have already emigrated or plan to do so. They’re scooping up homes from Seattle to New York, buying luxury goods on Fifth Avenue, and paying full freight to send their kids to U.S. colleges. Chinese nationals hold roughly $660 billion in personal wealth offshore, according to Boston Consulting Group, and the National Association of Realtors says $22 billion of that was spent in the past year acquiring U.S. homes. Arcadia has become a hotbed of the buying binge in the past several years, and long-standing residents are torn—giddy at the rising property values but worried about how they’re transforming their town. …

Richard Smith, the sun-tanned owner of a construction company working on seven homes in Arcadia, walks over to talk shop. Smith is building the 11,000-square-foot home for a developer who expects to sell it, he says, for $8 million to $9 million. Smith grew up in Arcadia, and his company has only Asian clients. They have certain preferences. “Obviously, if your house isn’t feng shui-friendly, it’s like we’re not even going to have a conversation,” he says. That means minding the number of stairs, the directions rooms face, and how materials line up. “And understanding the value of water, that’s probably one of my key strengths,” he says. “If you go to any successful businessman in China, or even here, they generally will have a picture of water behind their desk.” He whips out his phone and swipes to photos of a project with a waterfall cascading off the top of a gazebo and into a backyard pool.

Smith says many of the newest buyers in Arcadia don’t speak English. “They’ve just come here,” he says. “They’re on that EB—what’s it called?” He means the EB-5 visas that the U.S. grants to foreigners who plow at least $500,000 into American development projects. Congress created the program in 1990 to spur investment, and demand for the visas has grown recently. This year, for the first time, the government gave away the annual allocation of 10,000 visas before the year was over, with Chinese nationals snapping up 85 percent. Brokers in the area say it’s the most common way buyers are coming to town. “Once they obtain residency, they want to bring their family over and get the United States education,” says real estate agent Ricky Seow. “They can start a new life in California.”

Arcadia’s Chinese buyers may have made their wealth in different ways, but they face a common problem: getting their cash to America. China controls the flow of its currency, restricting residents from converting more than $50,000 in yuan into foreign denominations each year. At that pace it would take half a lifetime for a couple to buy a $4 million home.

Jeff Needham, a senior vice president at HSBC (HSBC), says it’s most common for buyers to transfer money from personal or business accounts they already have in Hong Kong, which doesn’t impose caps. “In most of our buyer situations, they have funds outside China already that they have accumulated over years,” he says, adding that the bank verifies the source of the funds.

It’s trickier for those without accounts in Hong Kong. Chen Ping, a local broker, says there’s a common workaround. “We call it ‘head-count wiring,’?” she says. Buyers line up other people—friends, family, or, if need be, paid strangers—to each transfer a share. “I once had a customer who bought a $1.9 million house in Arcadia who said, ‘Not a problem. I have more than enough head counts,’?” Chen says. Many buyers have legitimate ways to wire the funds, says broker Imy Dulake, but “there is no way we can have this much cash coming in legally.”

All in all, it’s better than living in Miami in 1980 and having a bunch of Colombians with no apparent occupation other than polishing their neck jewelry move in. The new people here are white collar criminals, not Tony Montana.

But this is a good example of why, as a Southern Californian, I’ve long been less deluded by the conventional wisdom that White Americans are naturally so much richer than the rest of the world that immigration policy and so forth couldn’t possibly matter. After all, whites are The Majority, right?

In contrast, I’ve long been aware from living in Southern California that there are a huge number of very bright, very hard working people in the rest of the world who envy how good we had it.