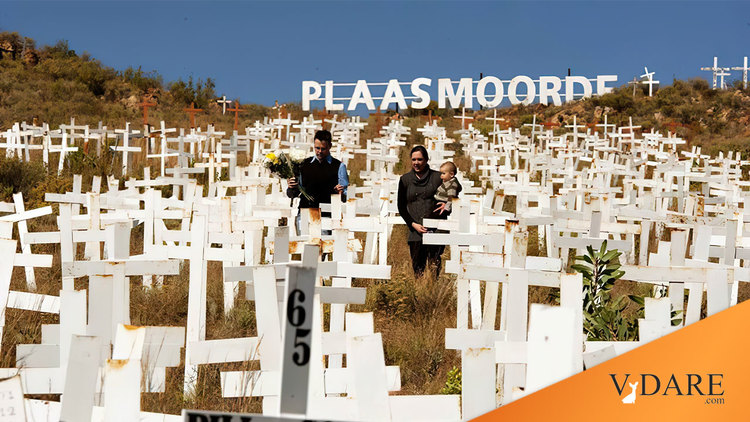 In South Africa, black-on-white farm attacks continued, using guns, pangas, clubs and an axe. (The panga, below, is the South African machete.)

One victim required stitches after being hit in the head with a piece of wood. Police arrested three suspects after being notified by an organized farm watch.

The farm owner was also shot and was hospitalized in critical condition. Three attackers were wearing uniforms similar to those of security guards. The intruders ransacked the farmhouse and made off with a Ford Ranger truck.

Reports say a 36-year-old farmer was assaulted with a panga while he and his 28-year-old wife were threatened with a firearm. After taking a revolver, cash, cell phones, and a laptop, the suspects kidnapped the couple, forcing them into their small truck in an attempt to withdraw cash from an ATM. The truck, however, broke down and the suspects fled.

The gang allegedly targets farm homes and other residential dwellings in the area.

The investigation commenced on July 3, 2021.

Reports say the six attackers forced one of the victims to call the farmer to request medicine. As Gart and Elna Botha’s vehicle approached the workers, the suspects shot at them but failed to injure the couple allowing them to speed off to report the crime. The suspects fled. Five were arrested later that day. Reports say the suspects may have been involved in other attacks dating back to 2017.

[Farm attackers use workers to lure couple out, open fire on them, Skuinsdrif, attributed to Oorgrens veiligheid, SouthAfricaToday.com, August 4, 2021]

Reports say the intruder gained entry by shattering a glass door with a gunshot. The family was watching television when the intrusion occurred. Stolen were a revolver, jewelry, wallet, cellphones, cash, laptop, and other items.

Among items stolen were four firearms. The victims eventually freed themselves with no serious injuries. Reports say the intruders began their assault at around 11 pm and left at about 2 am.

The victim stepped outside after his dogs began barking. The assailants, standing only a few feet away, began shooting. The farmer, however, was prepared and immediately returned fire prompting the attackers to flee. The victim sustained injuries to a lower leg and was hospitalized in stable condition.

No arrests were made. The incident occurred August 13, 2021.

Reports say three intruders gained entrance through a side door, held the woman’s daughter at gun point as she watched television. The invaders then made their way to the woman’s bedroom where they woke her, demanding cash and her earrings. Meanwhile, the 12-year-old activated a panic button and ran to safety outside the home. The suspects made off with the victim’s earrings in addition to a laptop, cell phone, keys to vehicles, and a laptop bag containing personnel documents.

A neighboring farmer observed the suspects and sounded an alarm. Other farmers responded promptly, sending the suspects fleeing. Reports say the invaders gained entry to the property by tunneling under a fence.

The victim was forced into his home where the attackers demanded he open his safe. While no money was found to be stolen, the assailants made off with a rifle, two cell phones, and other valuables. Wessels was tied to a chair before the invaders fled. Once he freed himself, the victim contacted neighbors. Police arrested five suspects and recovered the stolen rifle.

One of the intruders opened fire prompting the elderly farmer to retrieve a rifle and return fire. Police confiscated the rifle and began a murder investigation, though no arrests were made.

Reports say five heavily armed intruders wearing balaclavas gained entry by hurling a large stone through glass. The thieves made off with two flat screen televisions, jewelry, a laptop, cellphones, liquor, firearms, and other items. The couple managed to free themselves and triggered an alarm.

The victim was hospitalized. Police made no arrests. The incident occurred August 20, 2021.

The woman was “raped by an unknown number of attackers”, but only one arrest has been made. The incident occurred August 10, 2021.

The four assailants fled after another manager alerted the local farm watch. The suspects made off with four rams. The victim was not seriously injured.

Reports say the attackers robbed the family of firearms and cell phones before fleeing. No serious injuries or arrests were reported.

Geldenhuis suffered two bullet wounds in her abdomen, was hospitalized in critical condition, and would have required surgery had she survived. The incident occurred August 27, 2021.

Reports say Ashley Gibbon was lured outside his home by dimmed utility lights. After checking the utility pole, Gibbon was ambushed by five attackers as he returned to his home. Having been struck in the head with an axe, the farmer was dragged to a field. A gardener who responded to the victim’s screams was also set upon by the attackers. The two victims were forced back into the house where the attackers demanded the safe be opened. The gardener managed to escape and sought help. The attackers made off with two laptops, three cell phones and a pistol.