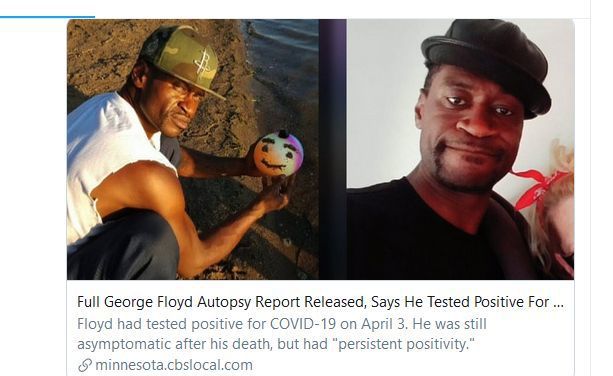 Autopsy: George Floyd Died With But Not From Coronavirus

From WCCO in Minneapolis:

MINNEAPOLIS (WCCO) — The Hennepin County Medical Examiner’s office has released their full and final autopsy report on the death of George Floyd, noting that he had tested positive for COVID-19, but it was not a contributing factor in his death.

In the report, the office’s final diagnoses states Floyd “became unresponsive while being restrained by law enforcement officers; he received emergency medical care in the field and subsequently in the Hennepin HealthCare (HHC) Emergency Department, but could not be resuscitated.”

The most notable detail in the final report is that Floyd had tested positive for COVID-19 on April 3. He was still asymptomatic after his death, but had “persistent positivity.”

The medical examiner’s office had issued an additional report on Monday, listing his manner of death is homicide due to “cardiopulmonary arrest complicating law enforcement subdual, restraint and neck compression.” The report also noted he had arteriosclerotic and hypertensive heart disease, fentanyl intoxication, and recent use of methamphetamine and cannabis.