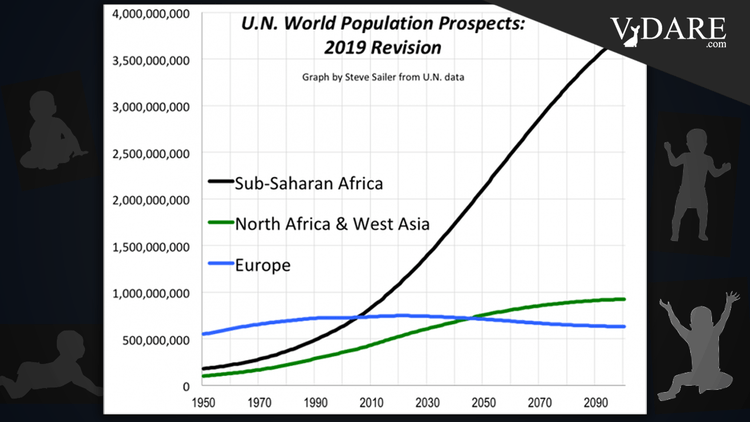 BBC: Jaw-Dropping Global Crash in Childbirth; Luckily, There Will be Billions of African Immigrants to Go Around!

… Are there any solutions?

… “We will go from the period where it’s a choice to open borders, or not, to frank competition for migrants, as there won’t be enough,” argues Prof Murray. …

The population of sub-Saharan Africa is expected to treble in size to more than three billion people by 2100.

… Prof Murray says: “We will have many more people of African descent in many more countries as we go through this.

“Global recognition of the challenges around racism are [sic] going to be all the more critical if there are large numbers of people of African descent in many countries.” …

So to be clear, this article is saying that there’s a global fertility crash among non-Africans, while the African population is expected to increase significantly.

Meanwhile, there is a burgeoning black/African supremacist ideology being adopted in the cultural hegemon of the world, the US, and being spread and promoted worldwide. The dominance and spread of such an ideology would impede the non-African world’s ability to deter African migration.

It’s very unlikely that there will be any great reversal in fertility rates forthcoming. Moreover, within the US, it seems unlikely that black privilege and black supremacy will be curbed and lose influence. Thus only a significant decline in the power and prestige of the US, and with it the attendant black supremacist ideology, will prevent African migration from inundating the world over the next century.