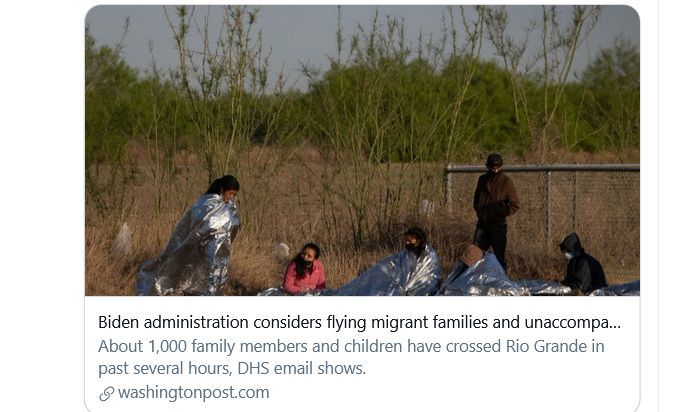 Moynihan’s Law of the Canadian Border is the Senator and social scientist’s early 1990s observation that a state’s social statistics such as test scores tend to vary according to how close a state is to the Canadian Border. Minnesota was usually the crown jewel of this correlation, although that was a long time ago.

A new spike in the number of families and children crossing the Rio Grande into South Texas over the past several hours is forcing U.S. Customs and Border Protection to request airplanes that will allow the Biden administration to transport migrants to states near the Canadian border for processing, according to two Department of Homeland Security officials and an email reviewed by The Washington Post.

Border officials requested the air support from U.S. Immigration and Customs Enforcement because 1,000 members of families and unaccompanied minors crossed the Rio Grande on Friday morning, and border agents have another 1,000 migrants they have been unable to process since last night, the communications show.

Hundreds of minors are crossing the border each day without their parents. Who are they?

The air transport plan is the latest measure in the Biden administration’s scramble to contend with a widening emergency that officials say they do not view as a “crisis” but a “stressful challenge.”

‘No end in sight’: Inside the Biden administration’s failure to contain the border surge

Shortly before Christmas last year, Susan Rice and Jake Sullivan, two top advisers to President-elect Joe Biden, sat for an interview with EFE, a Spanish wire service, to issue a stark warning to migrants considering journeying north to the nation’s southern border: Don’t come now — but help is on the way.

The next day, Biden was similarly pointed, saying his administration — while eager to roll back Donald Trump’s immigration policies — first needed to implement “guardrails” to avoid winding up with “2 million people on our border.”

Less than a month later, the new president began tearing down some of the guardrails himself. He issued five immigration executive orders on Inauguration Day alone and promised an immigration policy far more humane and welcoming than that of his predecessor. His administration also began allowing unaccompanied minors into the country, a marked departure from the Trump administration.

Now, the Biden administration is scrambling to control the biggest surge in 20 years, with the nation on pace for as many as 2 million migrants at the southern border this year — the outcome Biden said he wanted to avoid.

But who could have predicted this? I mean, besides Joe Biden himself.

Along with the existing struggle to combat the coronavirus, immigration has emerged as one of the administration’s most urgent challenges — seized on by Republicans as a political cudgel, posing risks to Democrats in the 2022 midterms and potentially undermining Biden’s governing agenda. The issue also threatens to overshadow the president’s recent political victories in passing a $1.9 trillion covid relief package and making rapid strides in vaccination efforts.

The situation at the border — which Biden and his advisers steadfastly refuse to call a crisis — is the result of an administration that was forewarned of the coming surge, yet still ill-prepared and lacking the capacity to deal with it. Administration officials have been plagued by muddled messaging, sometimes making appeals that seem directed more at liberal activists than the migrants they need to dissuade from coming to the country.

The administration also took several steps — including allowing unaccompanied minors into the country — that increased the flow of migrants and encouraged more to try their luck. There are currently more than 10,000 unaccompanied migrant children in the care of Health and Human Services, and 5,000 more in the care of Customs and Border Protection, nearly twice the previous record, according to the latest figures obtained by The Washington Post.

“When you create a system that incentivizes people to come across, and they are released, that immediately sends a message to Central America that if you come across you can stay,” said Democratic Rep. Vicente Gonzalez, whose South Texas district sits near the border with Mexico. “It incentivizes droves of people to come, and the only way to slow it down is by changing policy at our doorstep. If they don’t change the policy, the flow of continued migration traffic isn’t going to stop or slow down.” …

… Administration officials said many of their actions have been based on a desire to undo what they say were Trump’s illegal policies, as well as to take a more compassionate approach to migrants, especially children and families. Many of their initial moves were focused on interior enforcement and not at the border, one official added. There were no good options, they argued, but continuing to enforce Trump-era policies was simply antithetical to what the Biden administration stands for.

Enforcing the law would make the Statue of Liberty cry.

“We made the choice that we don’t want to be an administration that — if we can help it — has to turn back kids,” Rice, Biden’s domestic policy adviser, said in an interview. “We’re basically having to build the plane as we’re flying.”

During the transition period, career officials at U.S. Customs and Border Protection tried to issue sober alarms to the Biden team about the likelihood of a crisis at the border that could quickly overwhelm the nation’s capacity. Senior CBP officials delivered Zoom briefings to the Biden transition team that included modeling projections showing a steep increase in the arrival of unaccompanied minors if Trump’s policies were suddenly lifted, according to one current and two former Department of Homeland Security officials.

… Yet Biden immediately embarked on an aggressive strategy to roll back Trump administration policies.

… According to Biden administration officials, Trump had left them with a rickety immigration system at best — a patchwork of deterrent policies, some with dubious legal underpinnings — because his only goal was to keep people out.

But Biden did not have adequate preparations in place when he began rolling back some of Trump’s policies and sounding a welcoming note. Even some Biden allies said they had expected the White House to use the coronavirus crisis to buy themselves time to implement a more robust immigration plan before beginning wholesale policy changes, and were taken aback when Biden forged ahead.

Lots more in this fine article.