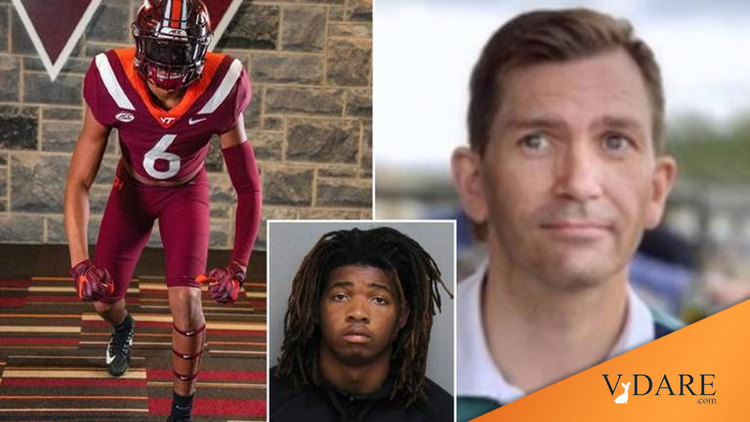 Two sacred beliefs of the Woke are that there are too many black men in prison and that society must be completely reordered to protect transgenders from pervasive violence. Of course, a large fraction of the murders of men pretending to be women are committed by black men, as in the following story from this afternoon:

CHRISTIANSBURG, Va. — Former Virginia Tech football player Isimemen Etute was found not guilty of all charges Friday in the beating death of a Blacksburg resident following an online catfishing scheme.

Etute, a Virginia Tech freshman linebacker at the time of the incident in May 2021, had been charged with second-degree murder, which carries a sentence of five to 40 years, and the jury could have convicted him on the lesser charge of voluntary manslaughter.

In other words, this wasn’t one of those trials where the only verdicts can be either one heavy sentence or an acquittal.

Instead, the jury believed a self-defense argument that Etute feared for his life after seeing the victim “make a reach” toward his bed where a knife was later found.

Etute collapsed in tears as the verdict was read, with cheers erupting from a contingent of about 30 family members, supporters and former teammates.

After the verdict, Etute’s lawyer, James Turk, said his client deserved a second chance at a football career following the jury’s decision. …

But will he continue to be fooled in reading who is the ball carrier?

Etute was arrested June 2, 2021, and charged with the May 31 murder of Jerry Smith, a local Blacksburg man who had posed as a woman online to meet straight, college-aged men.

The dead man out of drag:

According to testimony, Etute first connected with Smith in April 2021 on the dating app Tinder, with Smith posing as a woman going by the name “Angie Renee.” Along with teammate Da’Shawn Elder, Etute went to Smith’s Blacksburg apartment on April 10 under the assumption that he was meeting a woman. Elder testified that he was disturbed by the circumstances of the meeting, in which Smith hid his face and kept his apartment nearly pitch dark. Both players initially left, but Etute returned to the apartment, and testified that he received oral sex and a $50 gift from Smith.

Etute testified that he left the April 10 encounter still believing Smith was a woman, but teammates later began teasing him that his sexual partner could have been a man.

And then some more stuff like that happened and eventually the football player beat the tranny to death.

… During a police search of the apartment, a knife was found between Smith’s mattress and box spring, but Etute testified he never saw the knife, and he did not mention any concerns for his own safety during his initial police interview on June 2, 2021.

It will be interesting to see whether there will be much of a brouhaha over this verdict because it sets two of the top groups of the Pyramid of Diversity Pokemon Points against each other.

I’ve been talking about Football Privilege since the Jena Six a decade and a half ago, but the idea that black football players get away with a lot of bad stuff hasn’t widely caught on.

Maybe it will be decided that the dead man was not a True Transgender but was merely a gay white man. How does this work, anyway?

Or, presumably, cishet white men are to blame, for reasons TK.