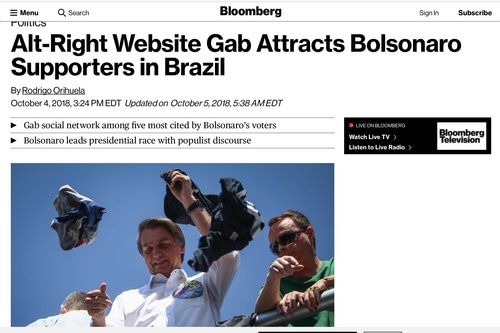 Bolsonaro Leads In Brazil Election; Journalists Snipe At Him By Attacking Gab

While in the United States everyone is focused on the Kavanaugh confirmation fight, the biggest global news this weekend will be the election in Brazil. Jair Bolsonaro, the populist frontrunner, is moving from strength to strength as he recovers from a knife attack. Gloomy reports from hostile journalists suggest Bolsonaro is now in a position not just to win the first round of voting, but the expected runoff.

The constant use of the "far right" label is obnoxious; the opposing Workers Party is never called "far left" despite its radical beginnings. Journalists, exercising their traditional role of policing the Narrative and serving those in power, are eager to take him down. They are now targeting Gab, which has become a popular platform for Brazilians.

A social network popular among the U.S. alt-right is one of the favorite web destinations for supporters of former Army captain Jair Bolsonaro, the Brazilian presidential candidate with the largest number of social media followers.

Gab.ai, a network set up two years ago as an alternative to Twitter, is among the top-five websites cited by Bolsonaro’s supporters on Twitter, according to a study by Alto Data Analytics, a firm that applies artificial intelligence in its analysis of big data. It is also the only non-Brazilian website among the 30 most-shared domains that make reference to the country’s Oct. 7 presidential election, the study found.

Gab is a platform with looser rules against discriminatory or hate speech and has attracted Bolsonaro supporters, particularly after many of them were banned from Twitter earlier this year. The Gab app isn’t available on Apple’s app store and has been banned from Google’s.

In unrelated news, Gab was banned from Stripe yesterday. Journalists had mixed feelings. On the one hand, as the biggest enemies of free speech, they think corporations shutting people up is a good thing. On the other, Stripe used the existence of NSFW content on Gab (almost impossible to police) as the excuse to deplatform them. While journalists do not believe the First Amendment applies to political speech, they do think it applies to pornography, so Stripe came under attack for banning Gab for the wrong reasons.

Torba, who positions himself as a free-speech crusader, has long claimed that he and his Nazi-ridden cesspool of a platform are under attack by everyone from journalists, to politicians, to web hosting providers. He has presented Gab as a content-neutral alternative to Twitter, a proposition that appealed to swaths of neo-Nazis who had been kicked off of Twitter for being too violently racist. But it’s no accident that Gab has attracted flocks of white supremacists — the platform’s frog logo is reminiscent of an internet meme that has turned into a hate symbol.

What isn't a hate symbol these days?