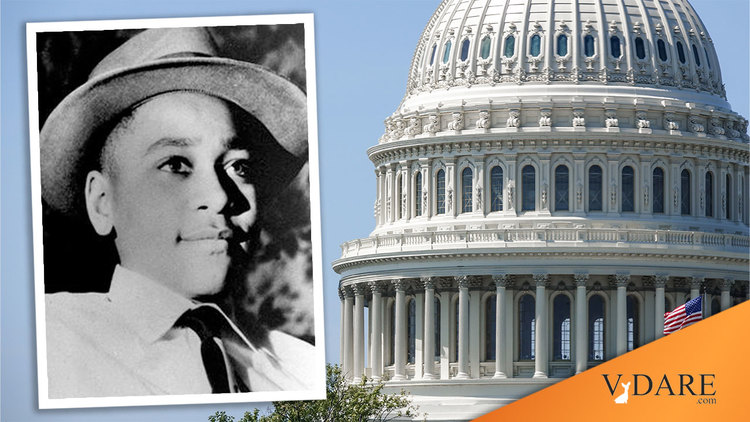 Earlier (December 7, 2021): Emmett Till Makes The Front Page Of The NYT, Pearl Harbor Does Not

Senate passes bill to honor Emmett Till and his mother

The teenager’s mother insisted on an open casket to demonstrate the brutality of his killing, which galvanized the civil rights movement.
Jan. 12, 2022, 4:51 AM PST
By The Associated Press

WASHINGTON — The Senate has passed a bill to award the Congressional Gold Medal posthumously to Emmett Till, the Chicago teenager murdered by white supremacists in the 1950s, and his mother, Mamie Till-Mobley, who insisted on an open casket funeral to demonstrate the brutality of his killing.

But what about Emmett’s dad, war criminal Louis Till, who provided half of Emmett’s DNA?

Looking up the winners of the Congressional Gold Medal, I see it’s basically the legislative branch’s equivalent of the more famous Presidential Medal of Freedom, but rarer, more committee-like, and more boring, with lots of groups being honored for their accomplishments (such as the Navajo Code Talkers in 2000 and then all other Native American Code Talkers in 2008) or victimizations, such as being blown up by white supremacists or eaten by sharks (the crew of the USS Indianapolis).

Congress and the President seem to get many of their ideas about the history of heroism from movies (e.g., the Hidden Figures ladies). There’s a movie on TV about Emmett Till’s mom, so I guess that explains this one.

One thing in common across both lists is that Congress and the White House both love to honor golfers: Congress has given 6% of its Gold Medals in this century to golfers (Byron Nelson, Arnold Palmer, and Jack Nicklaus), while G.W. Bush honored Arnie and Jack, Obama honored Charlie Sifford, and Trump Tiger Woods, Babe Didrickson Zaharias, Gary Player and Annika Sorenstam.