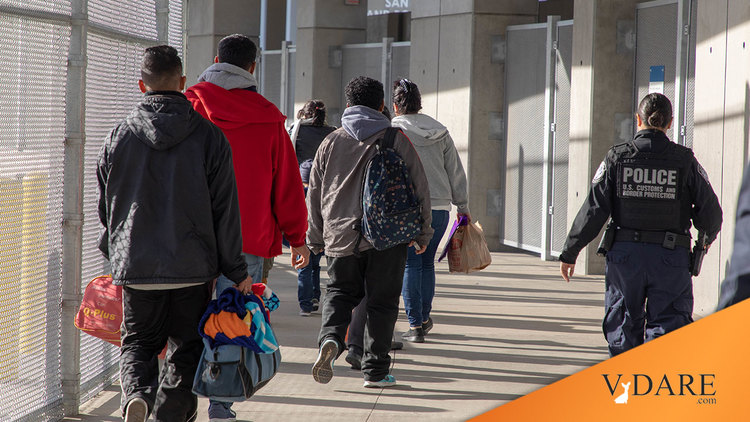 U.S. Customs and Border Protection will soon release the number of illegal-alien “encounters” at the southwest border in March. As VDARE reported yesterday, citing the Washington Post, the figure will likely surpass 200,000, which will bring the total for fiscal 2022 to more than 1 million. The Biden Regime has released almost 40 percent of them, which means the number released will soon be 400,000 on the year that began October 1. Bad as that number is, another is even worse. Biden and his Homeland Secretary Alejandro Mayorkas, a Cuban-Jewish immigrant and visa crook, have released more than 750,000 since January.

The frightening news comes from Andrew Arthur at the Center for Immigration Studies, whose data-driven piece only hit one sour note.

If I were good at math, I would not have gone to law school, but by my calculations, DHS has released 756,109 illegal migrants who were encountered by CBP at the Southwest border (both at the ports and between them) since the day after Joe Biden took office.

But good as Arthur is at crunching the numbers and explaining the law, he doesn’t seem to understand one thing, which is where he went slightly off tune.

He wrote that “Biden has no plan,” and that “he inherited policies that made the border secure, and he almost immediately trashed them because he did not like the policies or his predecessor who implemented them.”

Not so. Biden does have a plan. He didn’t open the borders and illegally stop enforcing immigration laws solely because he opposed Trump and his policies, although that is certainly true.

He did so to forward The Great Replacement.

What Biden and Mayorkas have done is tantamount to treason. They have refused to enforce the law and purposely invited an invasion of penniless vagabonds they hope will overwhelm The Historic American Nation, then dispossess and destroy it.

So, again, Biden has a plan. But we can’t stop it if we pretend that he is merely “reckless,” or a “failure,” or “incompetent.” If those were true, he would do the right thing at least once in a while. Even a stopped clock is right twice a day.

But Biden never does the right thing. So it’s about time for CIS and other groups mostly right on immigration to figure that out.