Coalition of the Fringes Slappy Fights in NYC and Philly

‘A Slap in the Face’: Pick of White Man to Lead Council Draws Fire

For months, black political leaders watched the bare-knuckled, back-room race to lead the New York City Council with a mix of hope and trepidation. Five of the eight candidates were black or Hispanic — offering the prospect of a first black speaker — but two of the most prominent front-runners were white men.

In the end, one of those white men, Councilman Corey Johnson of Manhattan, emerged victorious. Now black leaders are railing against a process that produced another white face atop the government of a majority-minority city that already has white men in the roles of mayor, comptroller, three of five district attorney’s offices and at the heads of various city agencies.

… But many black leaders expressed frustration, discontent and feelings of being taken for granted as the core of a Democratic base that is propping up the party, both in New York City, where Democrats outnumber Republicans more than 6 to 1, and in places like Alabama, where black voters helped elect a Democratic senator for the first time in decades.

“This is a slap in the face,” said Rev. Jacques Andre DeGraff, associate pastor of Canaan Baptist Church in Harlem. “People feel offended.” …

The Rev. Al Sharpton, president of the National Action Network, said he was also disappointed that there would not be a black speaker.

Who is white male Corey Johnson and how did a white male get on top in NYC politics? From Wikipedia:

Johnson was raised in Beverly, Massachusetts in a union household by his mother, Ann Queenan Richardson, a homeless services provider, and his step-father, Rodney Richardson, a Teamster.[1]

Johnson made national headlines in 2000 when, as captain of his high school football team at Masconomet Regional High School, he publicly revealed that he was gay. His story was reported by major national news outlets including The New York Times and 20/20.[2] 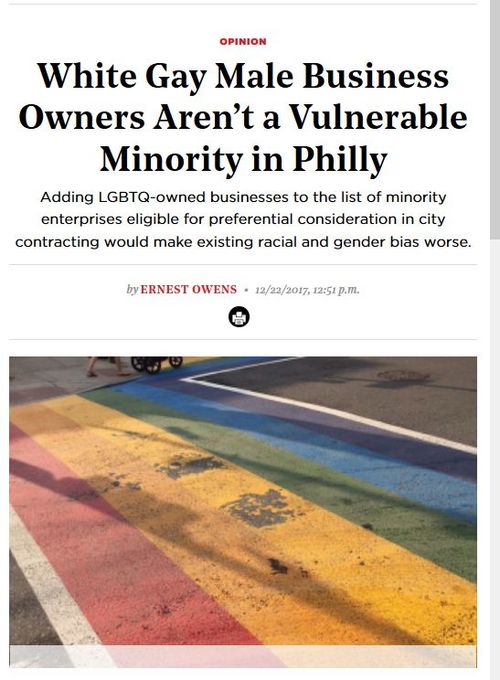 Meanwhile, from Philadelphia magazine, blacks are trying to de-intersectionalize white gays from getting affirmative action on government contracts:

Here’s a blunt fact: When it comes to business ownership, white gay men in Philadelphia are not vulnerable minorities.

They are not collectively marginalized by city agencies, nor do they face institutional roadblocks to financial opportunity. Some of them even own multimillion-dollar properties in the Gayborhood, enjoy long-standing economic power across the city, and wield political clout. In fact, white gay men are so privileged in Philly that the city had to mandate that some of the businesses they own receive sensitivity training for discriminating against women and people of color within the LGBTQ community.

So I was stunned when I read recently that some LGBTQ business owners want to be considered as minorities when bidding for city contracts. “We don’t expect this to be a system that is requiring X-amount of dollars to be spent with the LGBT community,” Evan Urbania, a white gay male business owner, said in an interview with WHYY. “We just really want to be next to the other minority and business services — those owned by women, African-Americans and the disabled. We want to be in that same class and category.”

Last year, the city’s Department of Commerce awarded $991 million in public contracts, close to 30 percent of which went to businesses owned by people of color, women, or disabled individuals. …

So, local LGBTQ businesses — which are mostly run by white gay men — are now trying to use sexual orientation as a way to take advantage of benefits that traditionally have been granted to minorities with a documented history of restricted access to public business opportunities. As a black gay man who shares both an underrepresented sexual orientation and a racial identity status, I hope the city doesn’t fall for the illusion that white gay men are in the same vulnerable situation as women and people of color. I have learned firsthand that when it comes to this particular city’s social dynamics, race and gender, not sexual orientation, are the real targets of institutional oppression.