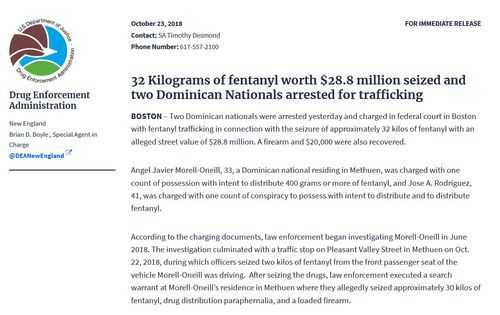 Two Dominican nationals were arrested yesterday and charged in federal court in Boston with fentanyl trafficking in connection with the seizure of approximately 32 kilos of fentanyl with an alleged street value of $28.8 million. A firearm and $20,000 were also recovered.

According to the charging documents, law enforcement began investigating Morell-Oneill in June 2018. The investigation culminated with a traffic stop on Pleasant Valley Street in Methuen on Oct. 22, 2018, during which officers seized two kilos of fentanyl from the front passenger seat of the vehicle Morell-Oneill was driving.  After seizing the drugs, law enforcement executed a search warrant at Morell-Oneill’s residence in Methuen where they allegedly seized approximately 30 kilos of fentanyl, drug distribution paraphernalia, and a loaded firearm.

Rodriguez was arrested when he arrived at Morell-Oneill’s residence to deliver $20,000, which was to be used to pay for half of the transportation costs of a narcotics shipment recently delivered to Morell-Oneill. The money was seized from a hidden compartment in a car driven by Rodriguez.