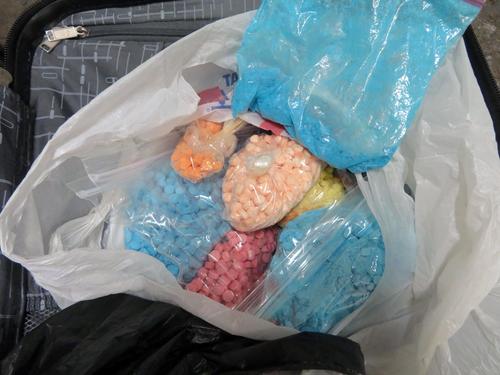 At the outset of the investigation, agents and officers identified Hernandez-Ozoria and Vasquez Chavez as suspected members of a large-scale black market pill distribution ring. On July 31, 2018, an undercover officer met the pair in the vicinity of 201st Street and Grand Concourse in the Bronx in order to conduct a narcotics-related transaction. Hernandez-Ozoria allegedly provided the undercover officer with a bag containing over 860 pills of purported oxycodone, a prescription opioid medication, and another 50 pills of purported ecstasy. In exchange, the undercover officer provided Hernandez-Ozoria with $5,000 cash. Subsequent analysis by a DEA laboratory confirmed that over 860 pills resembling oxycodone were counterfeit and contained a dangerous mixture of heroin and fentanyl, while the 50 purported ecstasy pills contained pure methamphetamine, more addictive than MDMA.

On Sept. 11, 2018, Hernandez-Ozoria and Vasquez Chavez again met with the undercover officer in the vicinity of East 164th Street and River Avenue in the Bronx for the purpose of selling 3,000 purported oxycodone pills in exchange for $20,000. Agents and officers arrested the two defendants during the narcotics transaction and seized approximately 3,000 purported oxycodone pills consistent in appearance with those sold on July 31, 2018. The pills were contained in a vacuum sealed bag. Results of DEA laboratory analysis are pending.

Following the arrests, agents and officers learned that Hernandez-Ozoria and Vasquez Chavez had conspired with others to manufacture the black market pills using a pill press machine housed in the boiler room area of 2314 Morris Avenue, where Castillo worked as the superintendent and allegedly maintained control over the boiler room, which could only be access by passing through the vacant studio apartment.

Later on Sept. 11, 2018, agents and officers contacted the management company that oversaw 2314 Morris Avenue, which contains more than three-dozen apartments, and obtained permission to conduct a search of the boiler room and adjacent vacant studio apartment. The area was accessed from an interior courtyard through a locked door. A review of security footage from the interior courtyard showed Castillo entering and exiting the boiler room area with an unapprehended co-conspirator. Castillo, who also resided in the building, was arrested at the time of the search.

A suitcase recovered in the living room contained various substances in powder and crystal form and thousands of pills. Laboratory analysis determined the powdered substance found in the suitcase was approximately 420 grams of a heroin/fentanyl mixture and the crystallized substance was nearly 180 grams of methamphetamine. Approximately 1,000 pills bore the appearance of counterfeit oxycodone pills, identical to heroin/fentanyl pills sold to the undercover. DEA laboratory analysis is pending on these pills. Thousands more pills were dyed in various colors. Laboratory analysis on a sampling of these colored pills determined they contained methamphetamine. A headlamp and colorful dyes were also recovered from the suitcase.

In order to remove the various unknown substances and drug manufacturing equipment from the boiler room area agents and officers donned personal protective equipment to prevent contact with hazardous materials. Fentanyl, a synthetic opioid, is approximately 50 times more potent than heroin and can be lethal when inhaled or ingested.

DEA Special Agent in Charge James Hunt stated, “A boiler room in the Bronx was used as an opioid supplier’s secret den; equipped with a pill press capable of an unlimited supply of deadly pills. The new threat facing public health and law enforcement is synthetic drugs because dealers act as mad scientists, producing unregulated concoctions for street sales. DEA and our law enforcement partners worked diligently to identify this drug ring and unplug its operation.”

Special Narcotics Prosecutor Bridget G. Brennan said, “Narcotics traffickers have long exploited the nation’s high demand for pain pills, a powerful gateway to addiction.  But this investigation reveals an even more deviant scheme – an organization creating and distributing counterfeit pills with highly potent and lethal compounds, manufactured in an apartment right next to the boiler room.”

New York City Police Commissioner James P. O’Neill said, “By precisely targeting the criminals who manufacture and peddle illegal narcotics on the streets of New York City, the NYPD and our law enforcement partners are confronting head-on the scourge of opioid abuse and fatal overdoses. I commend the professionals at the Office of the Special Narcotics Prosecutor and the Bronx District Attorney’s Office, and all the investigators of the Strike Force who helped ensure these arrests and indictments. Shutting down the supply of these deadly drugs will always be a top priority for us, and will undoubtedly save even more New Yorkers’ lives.”

New York State Police Superintendent George P. Beach II said, “I commend the New York Organized Crime Drug Enforcement Strike Force and our law enforcement partners at all levels for their hard work in uncovering and dismantling this counterfeit prescription drug operation.  These arrests are another example of how dedicated police work and strong collaboration among law enforcement officials are succeeding in keeping dangerous narcotics from infiltrating our neighborhoods. Criminals who sell drugs, counterfeit or otherwise, are putting our communities at risk and they will be punished to the fullest extent.”

“It is disturbing the lengths dealers will go to ensure their customers can get hooked on their product, like alleged here, where counterfeit oxycodone was made up of heroin and fentanyl,” said Angel M. Melendez, Special Agent in Charge of HSI New York. “The need for partnerships continues to be paramount as we look to disrupt and dismantle those criminals seeking to destroy lives to make a profit.”