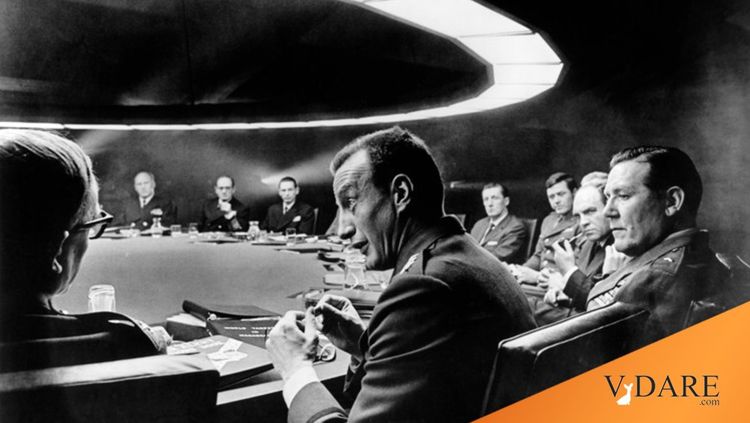 The RAND Corporation started out to do nuclear war strategy, with famous eggheads like John von Neumann and John Nash hanging out by the beach in Santa Monica talking first strikes and the like. The Department of Defense is still funneling money to RAND to think about the Great Problems of Our Time, like white privilege. From RAND’s website:

How Does Racial Bias Compound Over Time?

Decades after the Civil Rights Movement and the abolition of explicit racial discrimination, Black households in the United States still hold only a fraction of the wealth of White households. In 2017, the median White family held 14 times the median wealth of Black families, according to U.S. Census Bureau data.

Like I say, when they demand “equity,” they are thinking about your equity.

In this tool, we illustrate one contributing factor—the way that the small effects of racial bias can compound over lifetimes and generations to add up to large differences.

The following story offers illustrative examples of the ways in which this discrimination can affect people’s lives. In the tool below the story, change the inputs to explore how differing degrees of bias can compound to create inequities in education, income, and wealth.

Meet Daniel and Liam. They both live in the same suburban town and attend the same high school, where they both receive average grades. In their free time, they both love to read, swim, and watch suspense movies.

Daniel is Black. Liam is White.

We will follow along their life journeys—fictional scenarios that are broadly based on the relevant research.

Because the field is vast, these narratives do not perfectly represent the research. Rather, their stories are intended to be illustrative of how racial bias can compound and alter their otherwise similar personal trajectories.

In high school, both Daniel and Liam try out for the swim team, and they both make the cut. As they progress through the season, they excel on the team.

But balancing swim team and schoolwork is stressful, and they both begin to feel burnt out.

Daniel receives a phone call during class and takes out his phone to silence it. The teacher tells Daniel to hand over his phone for the rest of the day. Daniel gets upset and tosses his phone onto his teacher’s desk, inadvertently knocking over a cup of coffee onto assignments.

He is reported to the principal’s office, where he receives a week’s suspension—including being barred from swim practice—because the teacher took his behavior as a sign of aggression.

Liam receives a phone call in social studies class and takes out his phone to silence it. The teacher asks Liam to give her his phone. Liam uses profanity and rolls his eyes as he hands her the phone.

The White teacher gives Liam a stern warning but decides not to take further disciplinary action because he is typically a good student. …

Daniel would be the first person in his family to apply for college. He feels nervous about being rejected and even more nervous about the pressure to succeed if he is accepted. He asks his White health teacher what to expect.

The teacher tells Daniel that college would require a lot of hard work and that if he decides to apply to a nursing program, he will need to take on a lot of debt to pay for it.

Liam asks his White chemistry teacher whether she thinks he has what it takes to eventually become a nurse.

The teacher is thrilled to hear about Liam’s interest in nursing and encourages him to apply for several scholarships intended for future nursing students.

Daniel and Liam each apply to their top-choice nursing school, and both are accepted.

Because of his suspension record, Daniel is ineligible for the school’s academic scholarships. With his confidence still wavering about college—and without an added nudge from his parents—he had put off applying for external scholarships.

He takes out a mix of federal and private loans to pay for college tuition. His mom offers to pay for his books.

Liam is awarded an academic scholarship at his school and two of the scholarships his teacher had helped him apply for, which help him pay for a new laptop and textbooks.

Coupled with his parents’ savings, the scholarships enable Liam to pay for college without accruing debt.

After four years, both Daniel and Liam graduate from college with 3.5 GPAs. They each pass the National Council Licensure Examination and begin to apply for jobs as registered nurses (RNs).

Daniel submits his application to several hospitals and private practices, but after six months of no callbacks, he struggles to cover his cost of living while paying back his student loans. He decides to take a part-time job as a lifeguard to pay the bills.

After a few months, Daniel receives a job offer as a postoperative nurse and happily accepts. He is able to pay the minimum on his loans while adding a small amount to savings.

Liam decides to live with his parents while applying for nursing roles. He receives several callbacks after three months, and happily accepts a position as an operating room nurse.

Without college debt, Liam is able to start contributing to his savings account almost immediately.

Daniel and Liam both progress in their careers, eventually excelling in the nurse management career track.

Over the course of his career, Daniel receives promotions and raises that average 1.5 percent per year, allowing him to increase his starting salary of $67,000 to $141,051. This leads to lifetime earnings of $5.08 million.

Over the course of his career, Liam receives promotions and raises that average 2.5 percent per year, allowing him to increase his starting salary of $70,000 to $240,598. This leads to lifetime earnings of $7.06 million. …

Now, it may seem like we at the RAND Corporation are just making this fantasy about Daniel and Liam up, but that’s not the point, the point is that when we close our eyes, it seems very real to us. So this is science, people.

This work was conducted within RAND Project AIR FORCE.