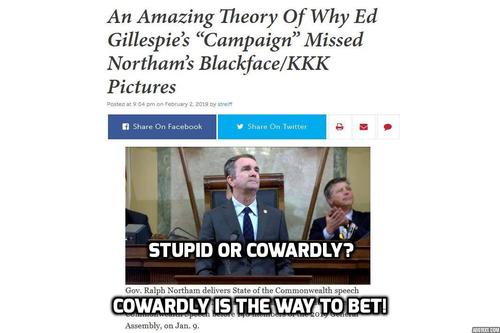 Ed Gillespie's Campaign May Have Had Northam Pictures But Wimped Out, Like McCain, And Romney, And Bush I, And...

When Ed Gillespie lost to Ralph Northam in Virginia, after not running on Trump's immigration patriot agenda, I blogged "Might As Well Have Said "Please Clap"—Ed Gillespie "Ran a JEB! Campaign in a Trump World".

From"streiff" at RedState, here is  An Amazing Theory of Why Ed Gillespie’s “Campaign” Missed Northam’s Blackface/KKK Pictures, which is that Gillespie's people had the Northam pictures, but were too chicken, "principled", and generally PC-whipped to use them, because of what the press would say:

Having observed a boat-load of GOP campaigns over the years, I find nothing at all implausible about the Gillespie campaign having the material and deciding not to use it. From what I’ve seen of Vichy Republicans in action at fairly close range, I’d actually be more shocked if it was used than finding it wasn’t. In fact, one of the reasons Kessler gives as to why the story might be false is actually one of the reasons why Gillespie might have decided not to use it.

In a racially charged campaign, would Gillespie want to be accused of trying to depress black turnout? Could he even be sure the press wouldn’t ignore the images and savage him (more than they were) for employing a “dirty trick” to distract voters from the lofty issues at stake…like would Gillespie supporters actually chase black and Hispanic kids with their pickups?

During the 1992 campaign, I was a military aide to an assistant secretary in one of the cabinet departments and all of my counterparts were Bush Schedule C appointees. Through them, I became acquainted with some senior people on the Bush campaign team. There was tons of oppo on Bill Clinton and his horndogging and the fights between Bill and Hillary on the campaign trail and some really salacious stuff on Hillary’s extra-curricular activities but the Bush campaign elected not to use it in large part because Bush was still stinging from the Willie Horton ad. So finding a GOP campaign acting against its own interests for the sake of being a noble loser isn’t new. I would submit the 2008 McCain campaign had as its objective to be a gracious loser to the first viable black presidential candidate. I’ve never really been convinced Mitt Romney wanted anything more than to lose cleanly in 2012.

As to the denials, if you’d had the images and chosen not to use them because you wanted to take the high road and protect “muh principles,” knowing what you know today, would you admit to not using them? My guess is that you would deny knowing anything about them and take the hit for being merely incompetent.[Emphases added]

Pictures of Northam looking either black-faced or Klanny—he now says neither of those guys is him—would have lowered black turnout, and that would have led to more press hate, something Trump isn't scared of:

Some previous articles on this from VDARE.com

Apparently, for Republicans, it's all about being "Beautiful Losers".