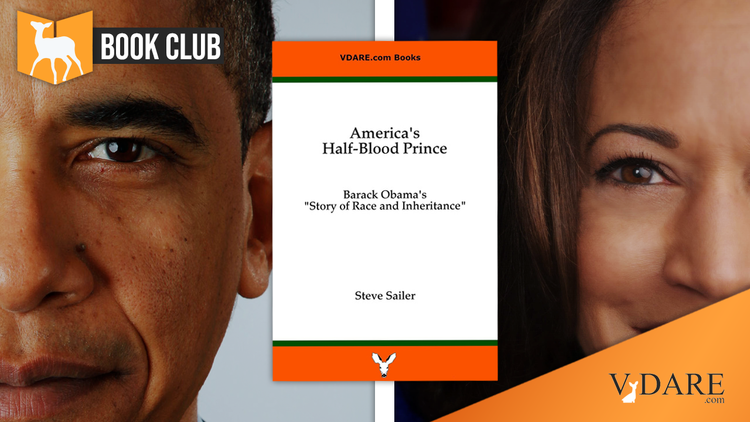 This October, the VDARE.com Book Club presents: America’s Half-Blood Prince: Barack Obama’s ‘Story of Race and Inheritance’ by our very own Steve Sailer.

“This book is excellent. Everyone should buy a copy.” – Glaivester review

But wait – you won’t have to buy a copy if you win one in our raffle! Enter by joining the VDARE.com Book Club here. The winner will get a signed copy of America’s Half-Blood Prince—raffle winner to be announced this Friday at noon!

Why a book about Obama? Why now?

At this point, it’s universally accepted that the Democrats are presenting “Harris Administration together with Joe Biden” this November.

So, the VDARE.com book club wants to know: who is Kamala Harris?

Well, we know what Barack Obama thinks about Kamala Harris. Obama sees Harris as a continuation of his legacy, rearranging the DNC speaker lineup so he could symbolically “pass the torch” to Harris. But what was that “legacy” and what did it do to race relations in America? Can we expect anything different from Kamala Harris?

“Obama, like one of those questing orphan-heroes elucidated by Joseph Campbell, goes on a semi-metaphorical journey in which he learns how to be ‘a black American.’” Not to reconcile the races like Obama the campaigner, but to find, in Obama’s own words, “a workable meaning for his life as a black American.” - AHBP p.10

According to John Derbyshire, "Steve Sailer gives us the real Barack Obama, who turns out to be very, very different – and much more interesting – than the bland healer/uniter image stitched together out of whole cloth this past six years by Obama’s packager, David Axelrod."

A master of pattern-recognition and blunt observation, Steve Sailer reveals, through Obama’s own prose, the fascinating psychology of the self-styled “half-blood prince” politician in Sailer’s delightfully deadpan style.

So let Steve Sailer be your guide through Obama’s journey of self-discovery, and sign up for the discussion here!