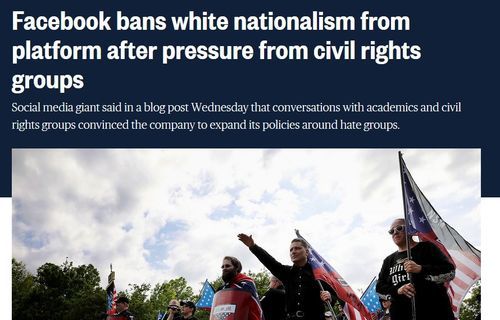 Facebook announced this decision Tuesday following pressure from Leftist activists and groups. “Today we’re announcing a ban on praise, support and representation of white nationalism and separatism on Facebook and Instagram, which we’ll start enforcing next week,” the company said in a statement. “It’s clear that these concepts are deeply linked to organized hate groups and have no place on our services” [Facebook bans white nationalism from platform after pressure from civil rights groups, by David Ingram and Ben Collins, NBC News, March 27, 2019]

Facebook added that “people will still be able to demonstrate pride in their ethnic heritage, we will not tolerate praise or support for white nationalism and separatism.” How the tech giant will determine the difference between ethnic pride and white nationalism is left unmentioned.

The new change not only blocks accounts it deems to be white nationalist.--any person who searches for white nationalism or related terms will be re-directed to Life After Hate, a left-wing non-profit.

And what about VDARE.com, which Wikipedia lyingly claims “associated with white supremacy,[2][3] white nationalism,[4][5][6] and the alt-right[7][8][9] “ –despite our explicit refutation?

The probable definition would include any white person who wants to reduce immigration and expresses Politically Incorrect views about race—or is “associated” a.k.a. accused by opponents of holding those views. You wouldn’t have to advocate for an all-white nation, much less call for violence, to earn a ban.

The nationalist American Identity Movement was quickly eliminated from Facebook and Instagram following the new rules. The group’s apparent offense is that it wants America to remain majority white. The coming days and weeks will show who else is considered a white nationalist.

The activists who demanded this censorship now want other tech giants to follow Facebook’s lead.

“Facebook’s update should move Twitter, YouTube, and Amazon to act urgently to stem the growth of white nationalist ideologies, which find space on platforms to spread the violent ideas and rhetoric that inspired the tragic attacks witnessed in Charlottesville, Pittsburgh, and now Christchurch,” Color of Change president Rashad Robinson said in a statement.

This is a very disturbing decision and is pure political censorship. It won’t save one life, but it will suppress views our elites fear. The groups and figures it will likely suppress are not terrorists or advocates of violence. They are simply people who advocate for the interests of white people. It’s as if Facebook banned all devout Muslims in response to ISIS terrorism.

Will President Trump and Republicans finally wake up when they see their supporters erased from social media?