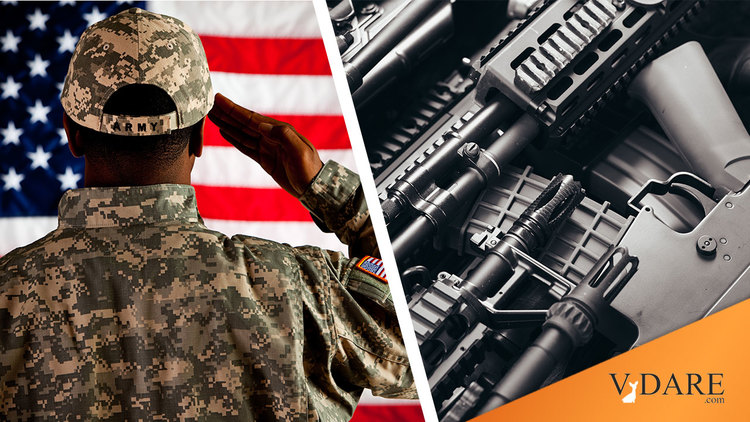 CBS has the news about some soldiers arrested by the ATF. Extremists, you ask? No, they're black soldiers selling guns to black street people in Chicago.

3 Soldiers Stationed At Fort Campbell Charged With Funneling Guns To Chicago; Prosecutors Say Some Were Used In Mass Shooting In March

As CBS 2’s Charlie De Mar reported, some of those weapons were linked to a recent mass shooting.

Demarcus Adams, 21; Jarius Brunson, 22; and Brandon Miller, 22, were charged Tuesday with conspiracy and other offenses by the U.S. Attorney’s Office in the Middle District of Tennessee.

They are accused of funneling guns back to the city from Fort Campbell on the Kentucky-Tennessee line where they are stationed.

The three soldiers were arrested Tuesday morning by agents from the Bureau of Alcohol, Tobacco, Firearms and Explosives and the U.S. Army Criminal Investigation Division.

The investigation began on March 26, when Chicago Police were called for a mass-shooting at a pop-up party on 79th Street near Campbell Avenue in the Southwest Side’s Wrightwood community.

The shooting happened at a storefront at 2515 W. 79th St. People were gathered for a celebration of life for a man who was the victim of gun violence.

One man was killed in the shooting and seven others were injured.

Multiple guns were recovered at the scene during the investigation, and five had been found to have been purchased recently from Federal Firearms Licensed dealers in the Clarksville, Tennessee area, prosecutors said.

The mass shooting was not a mass murder, and was a typical black mass shooting in that the shooters exhibited extreme bad marksmanship.

We covered that particular shooting with posts by me and Steve Sailer:

For a lengthy discussion of why blacks are bad shots, see here: The “Leaded Law” And Mass Shootings—Poor Black Marksmanship Is Saving Lives.

I hadn't noted at the time that it was a "celebration of life" for someone who was shot. In terms of black mass shootings, funerals and wakes for previous victims of "gun violence" can be considered superspreader events. See these posts by Steve Sailer:

However, my original point is how, while the Army has been having stand-downs to see which soldiers are secretly extremists, this kind of thing is happening among the black soldiery all the time.