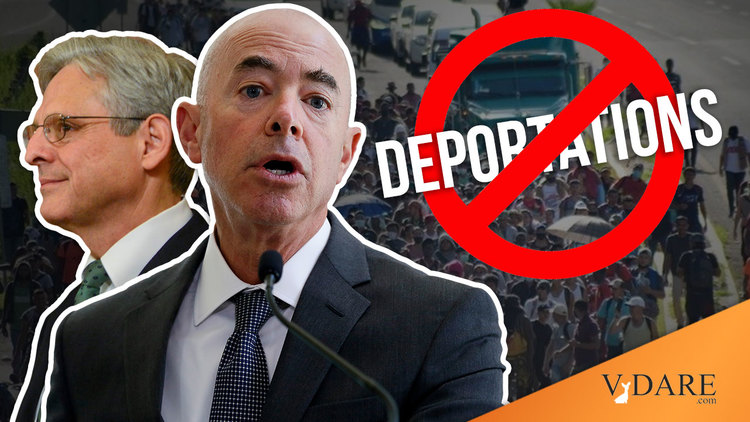 U.S. Attorney General Merrick Garland has joined Homeland Security Secretary Alejandro Mayorkas in kiboshing the expulsion of illegal-alien criminals. On Monday, Garland ruled that an illegal-alien criminal’s “mental health” is a reason not to deport him. Thus does another top U.S. official provide proof that the Brandon Regime, as VDARE suggested in a report on deportations, will use illegal-alien criminals to terrorize Americans as they are dispossessed and replaced.

Garland’s role in wrecking the country involves the case of an illegal-alien called B-Z-R, a Mexican illegal convicted of burglary. B-Z-R claimed that his mental illness and “sexual orientation” will invite persecution if he is deported to Mexico [Matter of B-Z-R, Respondent, Justice.gov, May 9, 2022].

NEW: AG Merrick Garland rules that when considering asylum claims, immigration judges can now take into account the mental health of asylum seekers who have been convicted of “particularly serious crimes” when determining whether or not they pose a danger to the US. @FoxNews pic.twitter.com/MON6VU2jLg

The immigration judge in the case determined that B-Z-R committed a serious crime and that mental health must not be considered in determining whether he is a danger to the community. The judge relied on precedent established in the case of an illegal called G-G-S:

An alien’s mental health as a factor in a criminal act falls within the province of the criminal courts and is not considered in assessing whether the alien was convicted of a “particularly serious crime” for immigration purposes.

Garland overruled the judge’s decision, which the Board of Immigration Appeals upheld because of G-G-S, and he tossed away the policy established in that case:

Going forward, immigration adjudicators may consider a respondent’s mental health in determining whether a respondent, “having been convicted by a final judgment of a particularly serious crime, constitutes a danger to the community of the United States.”

Now we get this.

They hate us and want to replace us. And they don’t care if a few of us get killed along the way.