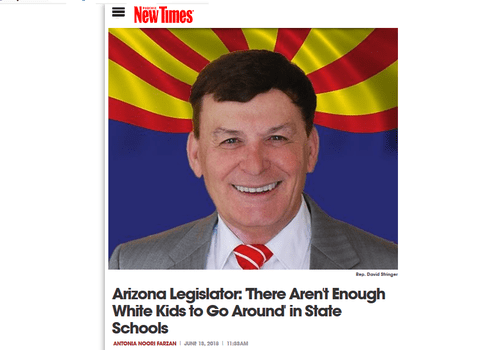 From the Phoenix New Times:

Arizona Legislator: ‘There Aren’t Enough White Kids to Go Around’ in State Schools

Stringer, a Republican from Prescott, also told the group that “there aren’t enough white kids to go around” in Arizona public schools, which will be reflected in the voter base in 10 to 15 years. …

Here’s the full text of Stringer’s remarks, as captured in the clip that Schapira posted:

60 percent of public school children in the state of Arizona today are minorities. That complicates racial integration because there aren’t enough white kids to go around. And when you look at that 60 percent number for public school students, just carry that forward 10 or 15 years. It’s going to change the demographic voting base of this state. And that’s what’s going on around the country. Immigration is politically destabilizing. President Trump has talked about this. Immigration today represents an existential threat to the United States. If we don’t do something about immigration very, very soon, the demographics of our country will be irrevocably changed and we will be a very different country. It will not be the country you were born into.

Nobody has explained what’s factually or logically wrong with Stringer’s statement: “That complicates racial integration because there aren’t enough white kids to go around.” Obviously, lots of Democrats have said much the same thing. But it is good for Democrats to say that. It is bad, though, for Stringer to say that: just look at him.