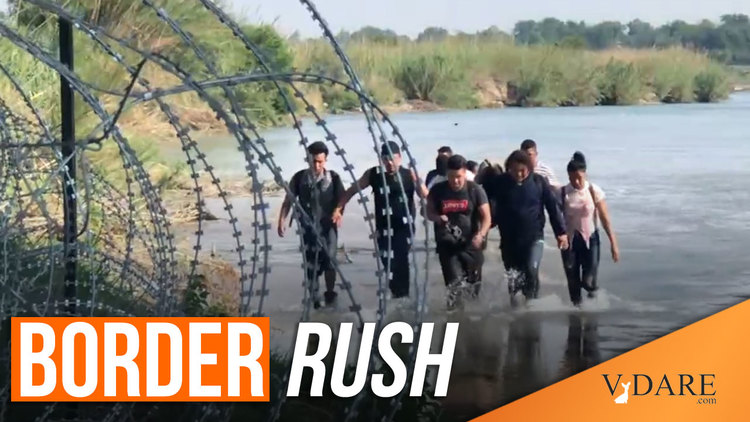 The Biden Regime’s plan to overwhelm the border with an invasion of illegal aliens is working. Since April 1, the day after Traitor Joe’s Centers for Disease Control said it would end Title 42 public-health expulsions at the border on May 23, border agents have handled well more than 500,000 illegals. Thus, it appears that U.S. District Judge Robert Summerhays’ temporary restraining order to stop Biden’s border treason is worthless. Border agents stopped more illegals at the border from May 1 through May 15—16,000 per day—than in all of April. What Biden’s people predicted would happen has happened.

More than a half-million migrants illegally crossed the southwest border with Mexico during a 10-week period ending on May 15. https://t.co/v9MBygHHvl

“Between April 1 and May 15 approximately 513,000 migrants illegally crossed the southwest border with Mexico,” the website reported:

The number reflects apprehensions cited in the April Southwest Border Migration Report and unofficial numbers obtained from a law enforcement source within CBP.

The source stated that agents apprehended approximately 47,000 migrants just in the past seven days.

Until recently, the Rio Grande Valley and Del Rio Sectors led the nation in migrant apprehensions. However, a recent surge in the El Paso Sector pushed the remote Texas-New Mexico sector into the lead, Breitbart Texas reported. The source told Breitbart that El Paso Sector agents detained nearly 5,000 migrants in [an] area processing center on Monday. Haitian migrants accounted for about 50 percent of this total.

You just wonder why Biden and his gang of Treason Lobbyists feel the need to appeal Summerhays’ order [Justice Department to appeal decision blocking Biden admin from ending Title 42, by Adam Sabes, May 20, 2022].

The order won’t stop the migrants from coming, and he can’t make Biden and Mayorkas continue the expulsions.

Now, if Biden follows last month’s precedent, he’ll release half the illegals that crossed the border since May 1. That total will be about 200,000.

But just keep telling yourself: The Great Replacement is a “white nationalist conspiracy theory.”