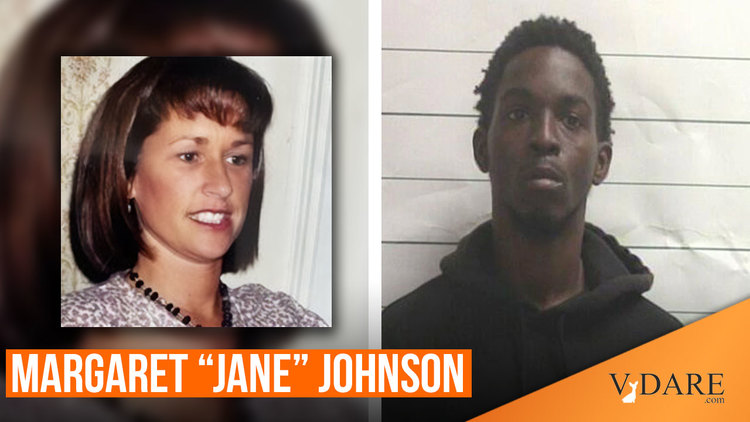 Earlier: Her Name Is Rosalie Cook: 80-Year-Old White Grandmother Murdered by Black Career Criminal Out on Bond (67 Prior Arrests)

In 2021 America, it’s increasingly obvious all White Americans are “at the wrong place at the wrong time.”

Grandmother fatally punched in French Quarter; brother has ‘no earthly idea why’: Police say suspect punched in her face, causing fall and hitting her head on concrete, NOLA.com, April 29, 2021

The brother of an Alabama-born grandmother who was fatally punched on a French Quarter street last week is trying to understand what motivated her killing, but he expressed relief Wednesday that police had captured a suspect.

“We have no earthly idea why this happened,” said Jeffrey Johnson, brother of Margaret “Jane” Johnson Street. “It won’t bring my sister back, but it helps knowing who did it and that they have him.”

New Orleans police say Johnson Street, 61, got into an argument with Jeremiah Mark, 23, in the 100 block of Royal Street on April 18 at about 7:45 p.m. Details about the argument haven’t been available, but Mark punched Johnson Street in the face, causing her to fall backward and hit her head on the concrete, police wrote in a sworn statement filed in Criminal District Court.

She was taken to University Medical Center, where staffers diagnosed her with a traumatic brain injury. She died April 20, and her death was classified a homicide after an autopsy two days later, police said.

Police said they didn’t immediately know Mark’s name, but they released a photo of him to the public and asked for help in identifying him because they wanted to question him. Mark saw the picture in the news media and met with investigators April 22. Police said he told them “he used his hand to push [Street] in the face.”

They booked him with manslaughter, which Louisiana law defines as an unintentional yet unjustifiable killing. Magistrate Court Commissioner Jonathan Friedman set Mark’s bail at $100,000, and he remained in custody Wednesday evening.

Her obituary says Johnson Street retired from a job at General Motors. Her survivors included her daughter and two grandchildren. She moved to the New Orleans area around 2014 and spent much of her time caring for her 7-year-old grandson, Johnson said.

He said his family first feared Johnson Street was attacked during a robbery. But then they realized nothing had been stolen from her.

A white grandmother was in the French Quarter of New Orleans and murdered by a black male via a single punch. Her family has “no earthly idea why” she was punched, though the racial reality behind the crime/attack is painfully obvious to even those suffering from racial myopia.

Worse, they then resorted to the “wrong place the wrong time” trope, failing to understand if white privilege, systemic racism, implicit bias were real and permeated the very air we breathe, no real estate in the United States would be described as either the wrong place or could ever be denoted as the wrong time for a white individual.

Her Name is Margaret “Jane” Johnson Street, a white grandmother whose murder in New Orleans by a black male didn’t have to occur were 2021 America not universally known as the “wrong place at the wrong time” for white people nationwide.