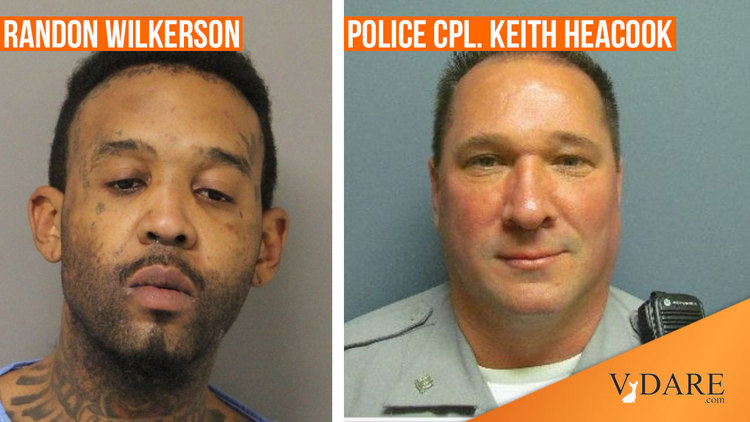 Only in a nation with as perverse an elite and leadership cabal as the United States of America would the death of George Floyd be cause for remaking our society and the horrific murder of a white cop by a black criminal barely be mentioned in local papers/local newscasts.

But that’s where we find ourselves in 2021, with the haunting specter of white supremacy, white privilege, systemic racism, implicit bias, redlining, food deserts, and the historical legacy of slavery the ultimate curse upon which all black people are held back from achieving the so-called “American Dream.”

In reality, the nightmarish world America is increasingly becoming was on full display in the last moments of Delmar Police Cpl. Keith Heacook’s life. He was a white police officer, husband, and father to a 12-year-old son.

He was beaten to death by a black criminal, who was in the process of assaulting two elderly individuals when Cpl. Heacock was dispatched to deal with the situation.

The widow of a slain Delaware police officer late Wednesday called for an end to the violence against police officers as 2021 is on pace to be the deadliest in history for law enforcement.

Susan Heacook, the widow of Delmar Police Cpl. Keith *Heacook, said he was simply doing his job when he responded to a fight-in-progress call on Sunday.

“The violence in our country has to stop. We can’t let this continue to happen. I will make sure another officer’s family doesn’t have to go through this,” she said in a statement. “Keith was one of the good ones, he didn’t deserve this. He was simply doing the job he loved to do — protect and serve.”

Mrs. Heacook said telling her 12-year-old son that he will never see his dad again was one of the hardest things she’s ever had to do. The son crumpled up into a ball and cried his eyes out, she said.

“Now our son will never have his father at any of his ball games ever again cheering him on like he always did, he won’t be there to teach him to drive, watch him graduate from high school, go fishing or do countertop jobs together (he helped Keith with his side business) and the list goes on,” the statement read.

Cpl. Heacook, who is White, is one of two officers who died in the line of duty on Wednesday.

He was declared clinically dead Wednesday after he was brutally beaten while responding to a 911 call, police say.

Randon D. Wilkerson, who is Black, is facing assault charges stemming from the attack on Cpl. Heacook, but Delaware Attorney General Kathy Jennings said those charges will be upgraded to murder.

The attack occurred when the officer was dispatched to a call about a fight in progress. Mr. Wilkerson had allegedly assaulted an elderly couple in their home, police said.

Through the first four months of the year, 111 officers lost their lives in the line of duty, according to the National Law Enforcement Officers Memorial Fund. That is an 11% increase from 98 during the same period last year.

A total of 360 officers died in the line of duty last year, according to the fund, the deadliest year for law enforcement since 1974.

More on the details of the vicious black on white assault:

A Wicomico County Sheriff’s Office deputy and a Delaware State Police trooper arrived on scene and found Heacook face down, unconscious, and surrounded by a pool of blood inside the home, according to court documents.

A resident of the home told police that she saw a uniformed police officer lying face down on the living room floor while Wilkerson stood above him. “The female resident stated she witnessed the accused/Wilkerson lift his foot and leg up directly over top of [the officer’s] head, and slam his foot down on his head repeatedly,” court documents state.

Our corporate media tells you George Floyd is a hero and all white people share the guilt in his death. Thus, statues must come down, as well as schools, buildings, and streets renamed to honor a habitual black criminal who had the misfortune of dying from a fentanyl overdose while resisting arrest.

Meanwhile, a black criminal stood over a white officer and basically stomped him to death with his foot, an apt metaphor for what’s happened to all white police officers and white America post the George Floyd insurrection.

But you didn’t know his name until reading it here.

This is the greatest reminder of black privilege in America. Had Cpl. Heacook shot and killed Randon Wilkerson during this incident, the latter would be the hero the media would be lionizing with posthumous articles all detailing how he was merely “trying to turn his life around.”