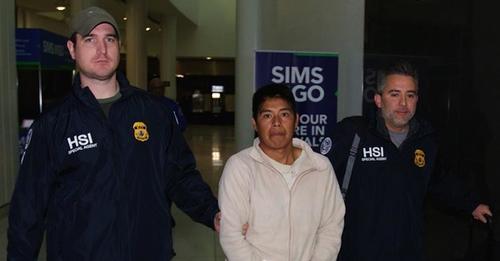 Raul Granados-Rendon, a member of the Granados family sex trafficking ring based in Tenancingo, Tlaxcala, Mexico, was sentenced Monday in the U.S. Attorney’s Office for the Eastern District of New York (EDNY) to eight years’ imprisonment.  Pursuant to an investigation by  U.S. Immigration and Customs Enforcement’s (ICE) Homeland Security Investigations (HSI) in New York, Granados-Rendon pled guilty in December 2017 to trafficking young Mexican women into the United States and forcing them into prostitution. As part of his sentence, the defendant was ordered to pay $1,305,393.80 in restitution to Jane Doe.

“The victims of this man were forced into prostitution after being lured to the U.S. with false promises then threatened, beaten and sexually assaulted,” stated Angel M. Melendez, special agent in charge of HSI New York. “This man was on our agency’s top 10 fugitive list before being extradited and taken into custody early last year. It has been a long road, but now he will face the consequences of his reprehensible actions.”

“With today’s sentence, Raul Granados-Rendon is the latest member of his family’s Mexican sex trafficking operation to be held responsible for preying upon countless women, and profiting from their exploitation and dehumanization,” stated Richard P. Donoghue, U.S. Attorney for EDNY. “This prosecution and sentence mark another important outcome in a nearly decade-long commitment by this Office and our law enforcement partners to obtain justice for the victims,”

From October 1998 to December 2011, Raul Granados-Rendon, 31, participated in a sex trafficking conspiracy with other members of the Granados family, to smuggle numerous young women from Mexico to New York and force them to work as prostitutes in New York City and elsewhere. The male members of the conspiracy used false promises of romance and marriage to lure the victims into relationships and convince them to travel to the United States to make money so that they could build homes for themselves in Mexico. Once in the United States, the victims were subjected to violence, threats and sexual assaults by the defendants. Raul Granados-Rendon directed one of his victims to teach another victim “Jane Doe” how to prostitute. When Jane Doe did not produce as much income as other Granados family victims, the defendant physically abused her, dragging her by her hair into a bathroom and forcing her head into a sink. The defendant also helped transport another victim back to Mexico after his brother impregnated her and failed at his efforts to induce an abortion.

The investigation, prosecution, bilateral enforcement action and extraditions of the defendants apprehended in Mexico were coordinated through the U.S.-Mexico Bilateral Human Trafficking Enforcement Initiative. Since 2009, the Departments of Justice and Homeland Security have collaborated with Mexican law enforcement counterparts in the Initiative to more effectively dismantle human trafficking networks operating across the U.S.-Mexico border.

The HSI New York’s Trafficking in Persons Unit (TIPU) is comprised of senior criminal investigators, intelligence officers and victim assistance specialists who aid in the rescue of trafficking victims and prosecution of traffickers and trafficking organizations. TIPU investigators focus on the exploitation of victims by force, fraud or coercion regardless of the person’s manor or entry into the United States. All TIPU investigations are victim-centered, seeking to rescue and protect the victims of trafficking.