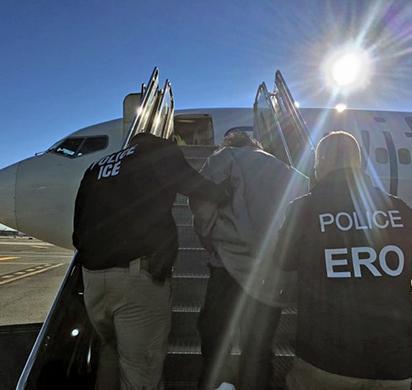 ICE Removes Mexican Convicted Of Manslaughter In US, Wanted For Murder In Mexico

A 63-year-old Mexican national wanted in his home country for murder was removed from the U.S. Tuesday by officers with U.S. Immigration and Customs Enforcement’s (ICE) Enforcement and Removal Operations (ERO) and turned over to Mexican law enforcement authorities.

Betancourt entered the U.S. illegally near San Ysidro, California, in 1991. He was convicted of aggravated manslaughter in 1997 in New Jersey and sentenced to 25 years of incarceration.

On Nov. 28, an immigration judge ordered Betancourt removed from the United States to Mexico and on Dec. 18, he was removed to Mexico and transferred to Mexican law enforcement authorities, where he is wanted for murder.

“This individual’s illegal immigration history, along with his aggravated manslaughter conviction, shows that he is a dangerous criminals who warranted removal from his community and the U.S.,” said John Tsoukaris, field office director of ERO Newark.

ICE is focused on removing public safety threats, such as convicted criminal aliens and gang members, as well as individuals who have violated our nation’s immigration laws, including those who illegally re-entered the country after being removed and immigration fugitives ordered removed by federal immigration judges.