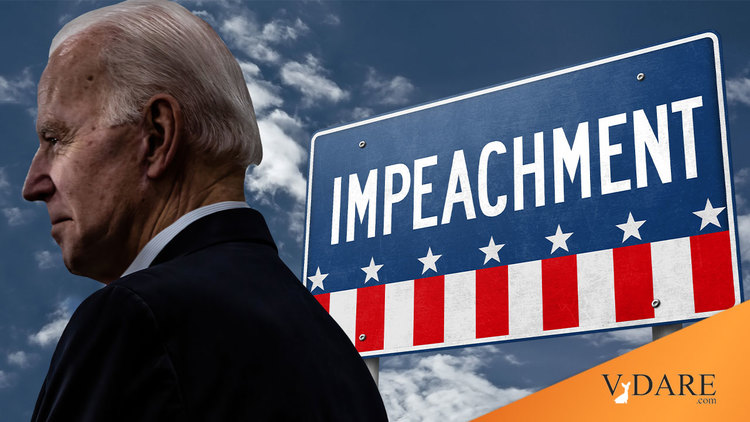 Impeaching Biden Over Immigration Now A Mainstream Idea—VDARE.com Has Been Calling For It Since W's First Term

Steve Baldwin at American Greatness has a column about the prospects of impeaching, if not convicting and removing, President Joe Biden:

In MAGA circles, talk is turning increasingly to impeaching Joe Biden after the midterm elections—assuming, of course, the Republicans retake the House of Representatives (which appears likely). Unfortunately, actual removal would require 60 votes in the Senate. Even under the most favorable scenario, it’s unlikely the GOP will pick up more than four Senate seats.

Nonetheless, with the strong likelihood the Republicans will take control of the House, impeaching Biden looks viable. Why? Well, for the same reason a Democrat-controlled House impeached Donald Trump—twice.

The Democrats used the impeachment process to persuade millions of middle-of-the-road and independent voters that Trump had done something terribly wrong. Of course, the Democrats’ two impeachment efforts were frivolous and did not comport with the constitutional requirements for impeachment, but no matter. They used it to sow doubt in the minds of low-information voters and there’s little doubt the narrative broke off some previous Trump voters.

So the precedent is firmly established...

Baldwin has numerous reasons Biden could be impeached, and it starts with immigration:

But there is no rush. Impeachment hearings should last as long as necessary—say, six months or so—so that every American will know about Biden Administration’s unprecedented assault on our constitutional rights in time for 2024. Impeachment needs to be used as an educational tool to inform undecided and low-information voters about the real criminal nature of the Biden regime.

Under the Constitution, impeachable offenses include treason, bribery, and “high crimes and misdemeanors.” The last phrase is generally thought to mean “an abuse of public trust” such as violating the Constitution and endangering our national security. As Senator Ted Cruz (R-Texas) points out, there are “multiple grounds” to impeach Biden. Here are a few:

Refusing to enforce federal immigration law has allowed nearly 2 million people to enter the country, including terrorists and criminals, who are clearly a threat to the American people. This can certainly be defined as treason as such policies give aid and comfort to our enemies. It could also be defined as a “high crimes and misdemeanors” since allowing certain people to break laws and not others, violates the equal protection clause of the 14th Amendment.

Baldwin lists seven other reasons for impeaching Biden, such as Abandoning Americans in Afghanistan, Reentering the Iranian nuclear deal, Lying about Hunter Biden’s corrupt deals, Weaponizing and politicizing the COVID epidemic, Urging Big Tech to constrict freedom of speech, Weaponizing the FBI and the Justice Department against parents, and Violating the rights of January 6 protestors, but really, the immigration one is all it takes.

And VDARE.com has been saying that for years. I looked through the archives and I see VDARE.com editor Peter Brimelow said in an interview in 2003 that "I think Bush's immigration proposal is treason and he should be impeached." We also said this repeatedly about Obama. See Obama’s Border Dissolution Is Treason. The Answer Is Impeachment. It Would Work.

Impeachment is vastly underused in American politics, especially relative to the number of "High Crimes And Misdemeanors" out there.