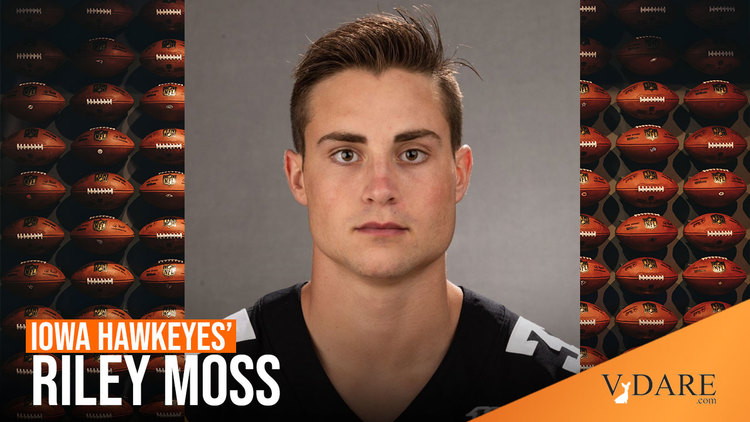 In a surprise decision, Riley Moss is going to experience one more season with the Iowa Hawkeyes.

The Big Ten Conference’s defensive back of the year for 2021 announced Wednesday he will come back for a fifth-year senior season. Moss, who has 10 career interceptions in four seasons at Iowa, had an extra year of eligibility available due to last year’s pandemic-shortened season.

Moss is a 6-foot-1, 194-pound cornerback from Ankeny. His two interception-return touchdowns in Iowa’s season-opening 34-6 rout of Indiana set the stage for a Hawkeye defense that would record a program-record 25 interceptions this season.

The Big Ten, centered on the Great Lakes Region, is the number-two college football conference after the Southeastern Conference (SEC). It’s so elite that the Big Ten is going to have 16 teams now that USC and UCLA (four miles from the Pacific Ocean) are joining.

So being the best cornerback/safety in the Big Ten is really good. He’s said to be ranked as the 8th best cornerback nationally for this upcoming season.

Or will the NFL move Moss to safety?

As I may have mentioned once or twice over the years, no white cornerbacks have begun a season as starters since Jason Sehorn and Kevin Kaesviharn (half-Thai and half-white) began the 2003 season as cornerback starters.

So why is Moss coming back for a fifth season when college players are allowed to enter the draft after three seasons?

It’s kind of like why  Cooper Kupp, who was the Super Bowl MVP last February, came back for a fourth season at Eastern Washington U. in which he set all sorts of college football receiving records.

Kupp, whose grandfather and father had played in the NFL, had only been offered a few scholarships at obscure inland Pacific Northwest colleges. Kupp won the award as top freshman receiver in college football, and then as a junior he won the Walter Payton Award as the top offensive player in college football. But still he passed up the NFL draft to return as a senior, and he set records for most career receiving touchdowns, receiving yards, and receptions.

Kupp was still only drafted in the third round, but he quickly became one of the better receivers in pro football. Then in 2021, the Rams acquired the outstanding QB Matt Stafford and Kupp racked up one of the great seasons in NFL history, leading the league in receptions, touchdowns, and yards—second all-time to Calvin Johnson with 1947, although in 17 games compared to Johnson’s 1964 in 16 games. But being second to Calvin Johnson is really good.

Kupp of Yakima, WA reminds me of how Gonzaga College of Spokane has made itself into an NCAA basketball powerhouse by recruiting white guys who stick around for a full four seasons before trying their luck in the NBA draft because they have a slow life history.