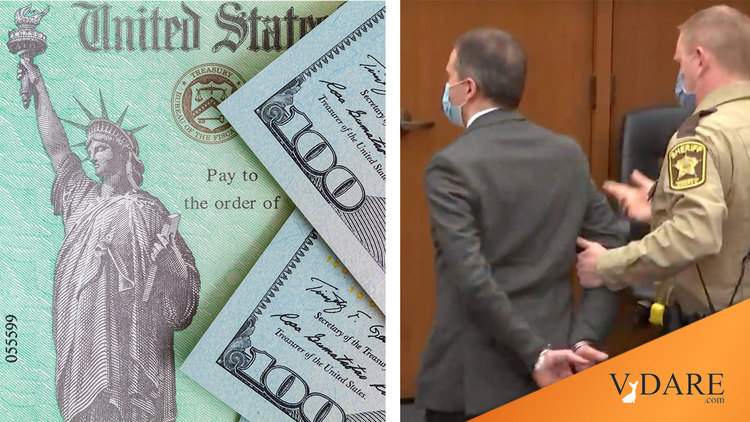 Is April's Surge In Black Exuberance Due To The George Floyd Verdict Or The Stimulus Checks?

My vague impression is that blacks have been acting particularly exuberant lately. (Exuberant is like vibrant, only more so.) Is it due to remembrance of George Floyd or the stimulus checks? For example, from the New York Post:

The clash between two patrons at a table of 11 broke out at about 9:45 p.m. before they had even eaten their food at the Wil­liamsburg restaurant, according to sources and the group’s server.

The fight then spilled outside, where the shooter, a 24-year-old man, pulled a gun and started firing toward his rival, sources said.

But instead, the gunman shot two men eating outside. …

Both men were taken to Bellevue Hospital, where they were expected to survive.

Someone inside the steakhouse called 911, and police officers monitoring a nearby anti-cop demonstration ­responded in seconds.

The cops arrested the suspected shooter with the help of his cousin, who pointed out the suspect, sources said.

This kind of thing has been happening a lot lately in New York. For example, here’s last week’s NYPD crime stats: In that week in 2020, 14 people were shot in NYC and there were 10 murders. This year, murders went up to 14, but it took 50 people getting struck by bullets to get there. Year to date, murders are up 9%, but the number of shooting victims is up 72%. Sailer’s Law of Mass Shootings suggests that most of the incremental shootings haven’t been carried out by, say, professional Mafia hit men, but by blacks shooting up social events. The more money, the more socializing, and the more socializing, the more bystanders who get winged.