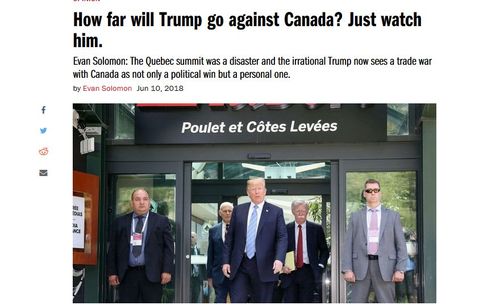 He just couldn’t keep his mouth shut. Until the very end, Prime Minister Justin Trudeau could consider his hosting of the 2018 G-7 Summit to have been be success. The simmering trade war between Canada and the United States had not risen to a boil, and President Donald Trump had agreed to the final communiqué, pious globaloney promoting the supposed vital need to foster gender equality worldwide.

The historic and important agreement we all reached at #G7Charlevoix will help make our economies stronger & people more prosperous, protect our democracies, safeguard our environment and protect women & girls’ rights around the world. That’s what matters. https://t.co/a6D109gTlB

But Trudeau had to have the last word. After Trump had departed to Singapore, to meet North Korea’s Kim Jong Un for a rather more important summit, Trudeau gloated to a press conference that Canada would “not be pushed around.” In response, Trump and his administration pushed back so hard that Trudeau’s eyebrows were almost knocked off his head.

Everything about this dude is fake, even his eyebrows. #Trudeau pic.twitter.com/XSNEOtMVZr

Trump noted Trudeau’s passive aggression, which was quite perceptive of him, given that snark has superseded politeness as the Great Canadian Characteristic. He tweeted that Trudeau “acted “so meek and mild” during the G-7 only to reveal himself later as “very dishonest and weak.”

American Trade Adviser Peter Navarro snarled, "There's a special place in hell for any foreign leader that engages in bad-faith diplomacy with President Donald J. Trump and then tries to stab him in the back on the way out the door.” He announced that United States had rescinded its acceptance of the communiqué, which was, in the event, a “socialist document.” And he had a warning, "To my friends in Canada, that was one of the worst political miscalculations of the Canadian leader in modern Canadian history. All Justin Trudeau had to do was take the win."

Larry Kudlow, Director of the National Economic Council, piled on with a string of insults directed at Trudeau: “amateurish,” “betrayal,” “double-crossing.” He was so angry that he even called him “Pierre” (the name of Justin’s father, prime minister of Canada from 1968 to 1984, a man not best liked by several American presidents). This might not have been a mistake but rather a rapier thrust at Justin’s amour propre, to wit, “Your father was a rat, and so are you.”

The Canadian media was quick to argue that the bust-up was pure bluster on the American side, conjured up to impress Trump’s base at home and to persuade Kim Jong Un that Trump is no paper tiger. There is doubtless some truth in this. But Americans should understand that Trudeau and his government are also grandstanding. Typical in this regard was Foreign Minister Chrystia Freeland’s comment that Canada, unlike the Trump government, “use[s] fact-based arguments.” (That Canadian passive aggression again.)

It would be difficult to overstate the extent to which the ascent of Trump has knocked the eyebrows off the heads of Canada’s elite. First a joke, then an impossibility, he is now an outrage to Canadian sensibilities. Andrew Coyne, our leading “conservative” columnist, is reduced to spluttering rage just thinking about him.

Our elite has taken refuge in smug superiority (“Those dumb Americans”), but there is also the fear that Trumpism may migrate north. That fear became almost hysterical last week when Doug Ford was elected Premier of Ontario. Ford postures as a populist, but his political beliefs, if indeed he has any, remain a mystery. One thing for certain, though, Ford hates the Canadian media as much as Trump hates America’s.

It is also a certainty that the consequences of a trade war between Canada and America would be dire, for us but also for you. Few Americans know, for instance, that Canada is America’s leading supplier of energy as well as the leading trade partner of close to two dozen American states.

What Trump wants is to remind the G-6 free riders which are sheltered under the American umbrella but pay it back with contempt (and of which Canada is the most egregious) of their place. Canada pretends that it is a world power, but it not, either economically or militarily. The American market is 10 times the size of Canada’s, so a modified autarky is possible there in the US but not here in Canada. And Canada lacks the means to defend itself, which is the only true guarantor of sovereignty. Specifically, Canada spends only 1.16% of its GDP on defense, far below Trump’s preferred minimum of 2%. (America spends 4%.)

Canadians of all parties have rallied around Trudeau and against Trump, which is only to be expected. But I suspect that this incident may persuade his handlers (whom he relies on utterly, as he is a dimwitted, Trustafarian narcissist, a world leader pretend) that he next time he meets with the President of the United States, his eyebrows will be firmly glued on, and his mouth will remain firmly glued shut.