Federal judges have joined the War Against The Historic American Nation, with its objective of changing America beyond restoration through mass immigration.

The war goes beyond President Trump’s executive orders restricting travel from jihad hotbeds. A pending Kansas case shows “so-called judges” (at VDARE.com we call them "kritarchs") fighting on all fronts to keep America open to Third Worlders, including jihadists, and give Americans’ rights to all comers. Here, the all-important right to vote.

A federal district judge enjoined (forbade in legal-speak) Kansas from enforcing the law, and the Tenth Circuit (Neil Gorsuch’s appeals court) upheld the injunction – so, for now, the courts have been abused again to prevent a state from enforcing duly enacted laws. The judges are two women - Clinton and Obama appointees - and a man - GW Bush appointee. The ruling is unanimous, Put no faith in Republican appointments!

The case languishes in federal court, with Kansas still forbidden to enforce its laws.

So far, so typical.

Now, a noteworthy wrinkle. One that reveals the breadth of lawless judges’ efforts to frustrate anything the Trump Administration does to control immigration and keep America safe – for while this case is supposedly about civil rights, it’s really about enabling non-citizens, including illegal aliens, to vote for Democrats.

In November 2016 Kris Kobach called on President-elect Trump. A photo from their meeting shows Kobach with a briefing paper in his hand. Its title is visible: "Department of Homeland Security: Kobach Strategic Plan for First 365 Days". 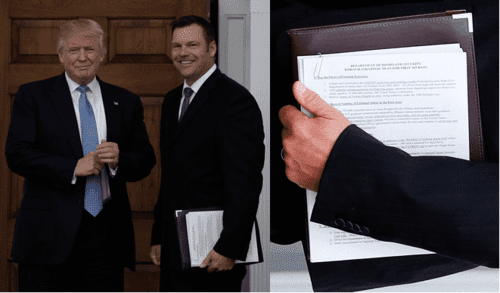 Now the plaintiffs in the Kansas case are demanding a copy of that document. The demand is outrageous. It is a private briefing Kobach prepared for Trump. Nothing to do with the Kansas law. The obvious purpose is to cherrypick it to bolster claims of Racism!

More outrageous, U.S. Magistrate Judge James O’Hara – Clinton and Obama appointee – has ordered Kobach to give the paper to him, so he can determine whether the plaintiffs should get it. Any bets how O’Hara will rule?

My suspicion: as soon as O’Hara gets it, the Kobach paper will find its way to the pressure-groups suing Trump over the executive orders, and exploited to claim Racism! somehow. If so-called judges will use Candidate Trump’s campaign-trail utterances to “interpret” his executive orders, they won’t balk at using a briefing President-elect Trump once saw.

Many fronts, one war…