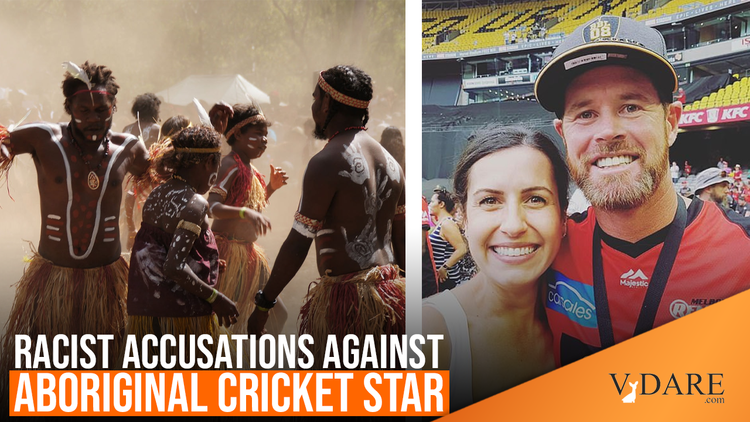 Meanwhile, in Australia, The Aborigines Are Looking Very Pale

In the U.S., white women like Rachel Dolezal and Jessica Krug are vastly excoriated for declaring themselves black. But in Australia, white people who look like Jim Carrey are encouraged to declare themselves Aboriginal based on the One Drop of Blood theory, and the government and media are ready to come down like a ton of bricks on skeptics. For example, from the Daily Mail:

Cricket Australia has called out a ‘blatantly racist’ social-media attack on Dan Christian, which came in response to the Indigenous allrounder opening up about casual racism in his sport.

Christian, a proud Wiradjuri man who represented Australia in 35 limited-overs games and captained an Aboriginal XI, detailed his experiences in the first episode of CA’s new series Cricket Connecting Country.

Christian recalled how he’d been the subject of throwaway lines and jokes about ‘the colour of my skin and the fact that I don’t look Aboriginal or whatever that means’.

Administrators at the governing body were disgusted that one user on Twitter, whose identity is now being investigated, responded to the session by questioning Christian’s Aboriginality.

‘You’re as much indigenous as my fat white dog is a dingo,’ the troll wrote.

This seems like a clever way to get rid of problems of racial inequality in Australia. While actual Australian Aborigines lag on most statistical measures of achievement, if you just declare a lot of people who are, say, 15/16th white to be Aboriginal, hesto presto, The Gap is mostly Gone. You just have to remember to get really really mad at any skeptics.

Apparently, the genes in Aboriginals for looks are fairly recessive, so even a 3/4th white person might look close to all white.

Something like this seems to be happening in the U.S. with the Hispanic category. The new New York Times listing below of Powerful Persons of Color includes a number of people of pure Iberian descent as Hispanic-Americans. (It even includes a Spanish CEO in Madrid.)