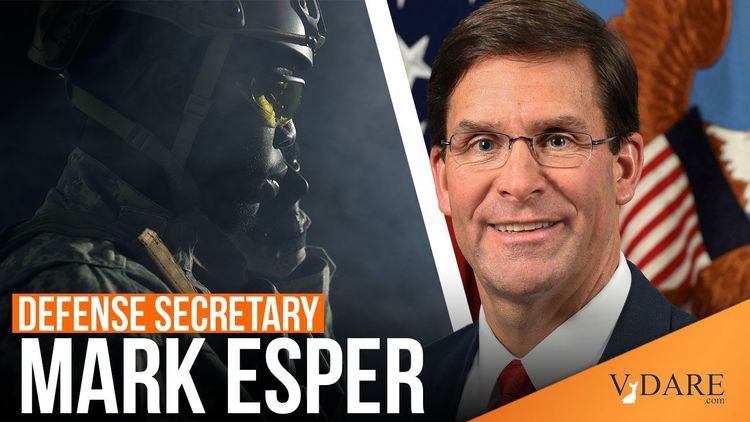 From Military.com a year ago during the Racial Reckoning:

Esper Bans Use of Promotion Board Photos, Orders Review of Hair and Grooming Standards

Defense Secretary Mark Esper put out a military-wide directive Wednesday barring the use of photos in promotion boards and ordering the development of new hair and grooming standards devoid of racial bias.

In a memorandum to the service secretaries and the Joint Chiefs of Staff, Esper outlined a series of steps aimed at eliminating “discrimination, prejudice and bias in all ranks” to promote equal opportunity, morale and the readiness of the force.

The steps include “prohibiting the use of photographs for promotion boards and selection processes pertaining to assignment, training, education and command.”

After all, we know that systemic racism is pervasive so just the sight of a black candidate’s photo must diminish his chances.

The Army had already moved to stop using photos in promotion boards, and the Navy planned to review the practice.

Esper also ordered all the services to “review hairstyle and grooming policies for racial bias” and “make appropriate policy modifications” no later than Sept. 15.

In addition, the memo calls for an update to equal opportunity policy “to prohibit pregnancy-based discrimination.”

“We must root out prejudice and bias that may exist but isn’t always transparent” throughout the military, Esper said. The measures are based on recommendations from the service branches. …

In a series of Twitter posts, Esper said that all commands should work to eliminate “unconscious bias” among service members through frank and open discussions.

Prejudice and bias in the ranks are not always transparent, he said in urging commands to increase the frequency of workplace and equal opportunity surveys to identify areas for improvement.

He called on commands to give him monthly updates through the end of this year to gauge the effectiveness of the policy changes.

“The actions I am directing are a necessary first step, but hard work remains and we will continue to learn as we move forward,” Esper said.

And now the brass have learned. It turns out that America is biased in favor of blacks, so eliminating their photos hurts them by forcing evaluation to be based more on their accomplishments.

From Stars and Stripes today :

WASHINGTON — The Navy could include service photos in promotion packages again after data suggested minorities are less likely to be selected blindly in some situations by promotion review boards, the service’s chief of personnel said Tuesday.

Diversity among leadership dropped after photos were removed last year from Navy promotion packages, Vice Adm. John Nowell said during a panel discussion on diversity and inclusion at the Navy League’s Sea-Air-Space conference.

“I think we should consider reinstating photos in selection boards,” he said. “We look at, for instance, the one-star board over the last five years, and we can show you where, as you look at diversity, it went down with photos removed.”

Former Defense Secretary Mark Esper directed all services in July 2020 to eliminate photos from promotion and selection boards to support diversity in the ranks. But Nowell said adding them back could do more to build a more diverse leadership force.

“It’s a meritocracy, we’re only going to pick the best of the best, but we’re very clear with our language to boards that we want them to consider diversity across all areas,” he said. “Therefore … I think having a clear picture just makes it easier.”

The Marine Corps is also “looking at reinstating the photos,” Brig. Gen. A.T. Williamson, director of the service’s manpower plans and policy division, said during the panel discussion.

“There are elements of the photo that are … very helpful for us. I think that we may find that we may have disadvantaged individuals by removing those photos from the boards.”

Williamson said there was an “assumption that there’s bias in the boardroom,” but a recent review of the Marine Corps’ promotion board process by the Department of the Navy’s office for diversity, equity and inclusion found that’s likely untrue.

“We’re doing a survey right now to see if there’s bias inside the evaluation system,” he said. “[If] we find out that there’s disparities within the way we do business within a service, we need to be intellectually curious enough to ask why and then figure out what we need to do.”

The comments come as the Defense Department works to address extremism and promote diversity in the military. Defense Secretary Lloyd Austin has spoken “very publicly that at the senior leaders’ level, we are not as diverse as the rest of the force,” Chief Pentagon spokesman John Kirby said Tuesday.

Kirby said he “wouldn’t speculate the degree to which the secretary might get involved in something as specific as photographs” because the services run their own promotion system. However, he said Austin is open to new ideas to support diversity and inclusion.

“There’s a lot of work to be done,” Kirby told reporters at the Pentagon. “The secretary has reiterated numerous times to service leadership that he wants to be open-minded about additional solutions, additional ways to increase and to improve diversity inclusion throughout the force, and that he wants them to think creatively about that.”

My translation of General Austin’s suggestions from militaryese: “Do it. Promote more blacks and fewer whites. Now.”