Mohammed Filmmaker Sentenced to Silence in the Slammer

On Day One of the Obama second term, the filmmaker who was wrongly blamed for causing the deaths of four Americans at the Benghazi 9/11 terrorist attack was sentenced to a year in prison. (Secretary of State Clinton had assured the father of murdered SEAL Tyrone Woods that the administration would have the filmmaker arrested, even when she knew the video had nothing to do with the assault.)

The man, aka Nakoula Basseley Nakoula, is now called Mark Basseley Youssef, which befits someone who has had a history of multiple aliases, along with other misbehaviors. He is far from being a noble free-speech icon and should have been deported long ago for his crimes of bank fraud and identity theft. In 2010 he was ordered by the court to pay more than $790,000 in restitution for his check kiting scheme, so he is not a nickel and dimer.

So Nakoula/Youssef is a certifiable dirtbag. But he is being railroaded as an inconvenient sidebar to an Obama scandal that left four Americans to die in Benghazi. One year in prison is not a normal sentence for a parole violation.

Putting the filmmaker on ice for a year is apparently part of what Thomas Sowell has called “cooling out” the voters on the Benghazi issue, meaning to stretch it out into forgetfulness.

Below, Nakoula/Youssef was arrested by several officers to help create a narrative of an evil anti-Islam video created by a terrible Islamophobe. 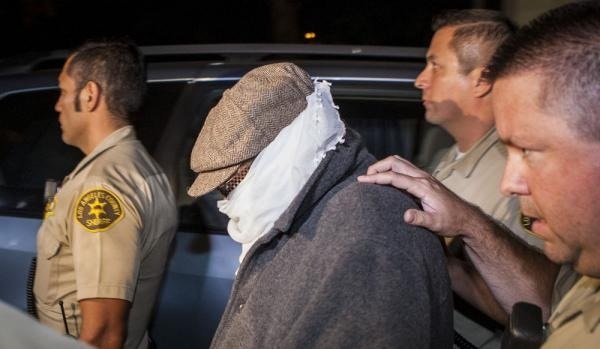 LOS ANGELES (AP) — The California man behind an anti-Muslim film that led to violence in many parts of the Middle East was sentenced Wednesday to a year in federal prison for probation violations in an unrelated matter, then issued a provocative statement through his attorney.

The sentence was the result of a plea bargain between lawyers for Mark Bassely Youssef and federal prosecutors. Youssef admitted in open court that he had used several false names in violation of his probation order and obtained a driver’s license under a false name. He was on probation for a bank fraud case.

Shortly after Youssef left the courtroom, his lawyer, Steven Seiden, came to the front steps of the courthouse and told reporters his client wanted to send a message.

“The one thing he wanted me to tell all of you is President Obama may have gotten Osama bin Laden, but he didn’t kill the ideology,” Seiden said.

Asked what that meant, Seiden said, “I didn’t ask him, and I don’t know.”

U.S. District Court Judge Christina Snyder accepted the plea agreement and immediately sentenced Youssef after he admitted to four of the eight alleged violations, including obtaining a fraudulent California driver’s license. Prosecutors agreed to drop the other four allegations under the plea deal, which also included more probation time.

All parties agreed that none of the violations had to do with the content of “Innocence of Muslims,” a film that depicts Mohammad as a religious fraud, pedophile and womanizer.

However, Assistant U.S. Attorney Robert Dugdale argued Youssef’s lies about his identity have caused harm to others, including the film’s cast and crew. Deadly violence related to the film broke out Sept. 11 and spread to many parts of the Middle East.

“They had no idea he was a recently released felon,” Dugdale said Wednesday. “Had they known that, they might have had second thoughts” about being part of the film.

He said they have had death threats and feel their careers have been ruined.

Seiden said his client admits to being the film’s scriptwriter but had no other involvement except what he described as being a “cultural adviser.”

Youssef, 55, was arrested in late September, just weeks after he went into hiding when the deadly violence erupted.

Enraged Muslims had demanded severe punishment for Youssef, with a Pakistani cabinet minister even offering $100,000 to anyone who kills him.

Federal authorities initially sought a two-year sentence for Youssef but settled on a one-year term after negotiating the plea deal with Youssef’s attorneys. Prosecutors said they wouldn’t pursue new charges against Youssef— namely making false statements — and would drop the remaining probation-violation allegations leveled against him. But Youssef was placed on four years’ probation and must be truthful about his identity and his future finances.

Seiden asked that his client be placed under home confinement, but Snyder denied that request. Youssef will spend his time behind bars at a Southern California prison.

Youssef served most of his 21-month prison sentence for using more than a dozen aliases and opening about 60 bank accounts to conduct a check fraud scheme, prosecutors said.

After he was released from prison, Youssef was barred from using computers or the Internet for five years without approval from his probation officer.

Federal authorities have said they believe Youssef is responsible for the film, but they haven’t said whether he was the person who posted it online. He also wasn’t supposed to use any name other than his true legal name without the prior written approval of his probation officer.

At least three names have been associated with Youssef since the film trailer surfaced — Sam Bacile, Nakoula Basseley Nakoula and Youssef. Bacile was the name attached to the YouTube account that posted the video.

“This is a defendant who has engaged in a long pattern of deception,” Dugdale said. “His dishonesty goes back years.”

Court documents show Youssef legally changed his name from Nakoula in 2002, though when he was tried, he identified himself as Nakoula. He wanted the name change because he believed Nakoula sounded like a girl’s name, according to court documents.