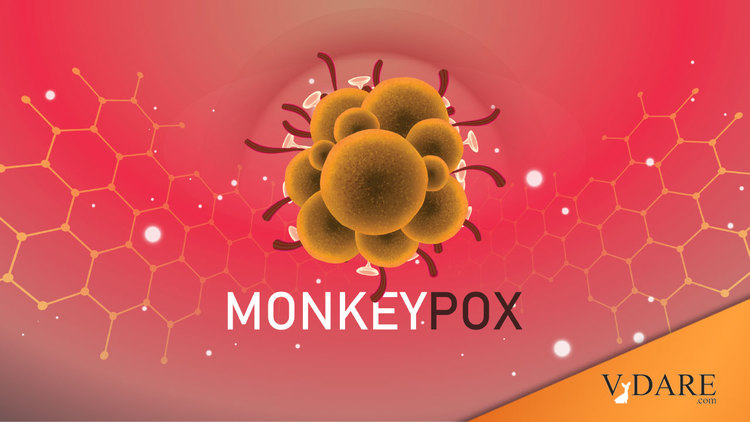 The Centers for Disease Control is monitoring six people for Monkeypox, a disease similar to cowpox and smallpox that originated in Africa. Meanwhile, officials in the United Kingdom have confirmed 20 cases. As of two days ago, one case had been confirmed in Massachusetts and just six in England. Now, the African malady is spreading. Good suspects: African “migrants.”

Countries in Europe and North America are continuing to report more cases of monkeypox, but experts say the disease so far does not pose a serious risk to the public. https://t.co/HawtCtvEEf pic.twitter.com/tuju4o6hDY

CDC official Jennifer McQuiston confirmed the possible contagion here [CDC monitors 6 people in US for possible rare monkeypox, says public ‘should not be concerned,’ by Jacqueline Howard, CNN, May 20, 2022].

“We have a level of scientific concern about what we're seeing because this is a very unusual situation. Monkeypox is normally only reported in West Africa or Central Africa, and we don’t see it in the United States or in Europe—and the number of cases that are being reported is definitely outside the level of normal for what we would see,” she told CNN.

The six people CDC is watching were on the same flight as a “British person” who contracted the disease in Nigeria [Monkeypox cases detected in US, Europe, but experts caution against comparing it to COVID-19, by Mary Kekatos, ABCNews, May 19, 2022].

As for England, where 20 people have contracted the disease, officials are apparently baffled [Monkeypox cases in the UK more than double to 20, by Megan Baynes, SkyNews, May 20, 2022]. “Exactly what is driving the UK’s largest outbreak is a mystery—normally the disease is sporadic and linked to travel in parts of Africa, where it is endemic,” the network reported.

Or maybe, just maybe, it’s linked to the African migrants who have been flooding England by the boatload.

A new disease has been found in the southeast of England that predominantly comes from African countries... tens of thousands of unchecked African migrants arriving in the southeast... join the dots.#monkeypox https://t.co/CXqL8WLCt9