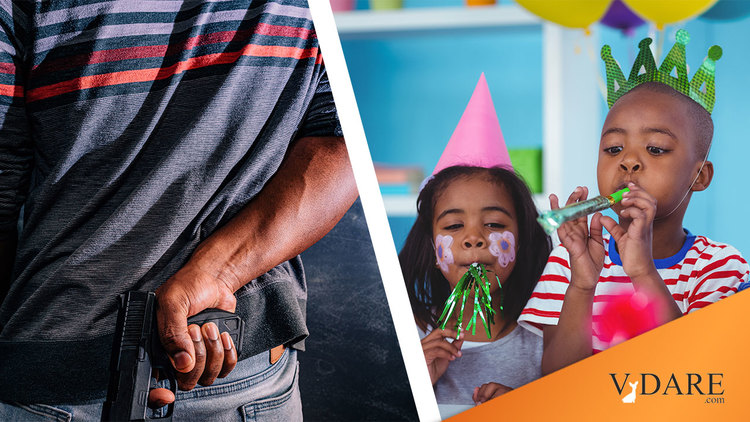 Nine Black Children Shot By Black Gunman At Louisiana Birthday Party; Not One Of 60 Reported Attendees Will Cooperate With Police

One of these days we might get some sort of proof Black Lives Matter.

Until then, sufficient proof to showcase how Black Lives Don’t Matter to Other Black People continues to roll in unabated.

Nine Kids Shot at 12-Year-Old’s Birthday Party and ‘Not One’ of the 60 Attendees Will Make a Statement to Police, by Mike Miller, Red State, April 20, 2021

Oh, this is awkward. At least nine kids were shot at a 12-year-old’s birthday party in Louisiana on Saturday night, as reported by the New York Post, and not one of the reported 60 attendees was willing to make a formal statement about what the hell happened or why.

Gunfire erupted after a feud broke out at the home party in LaPlace, Louisiana, according to a press release from the St. John the Baptist Parish Sheriff’s Office. Again, at least nine kids — first reported as six — under the age of 18 were struck, seven of whom were treated and released, while two of the victims remain hospitalized as I write.

As reported by NBC News on Monday, the victims’ ages ranged from 12 to 17. The young victims collectively sustained injuries to the arm, ribs, foot, legs, stomach, head, and more.

“We have not one witness, not one person that saw anything yet. So we’re trying to solve it on our own right now. I’m going to be polite — it’s more than frustrating.”

What’s wrong with this picture? Nine kids shot. Two remain hospitalized. Not one person in attendance is willing to cooperate with law enforcement officials, including loved ones of the victims? Ever hear of such a thing? Me neither. Until now.

Rashad Bolden, who lives two doors down from the home at which the shooting took place, told the local CBS affiliate he saw wounded kids taken from the scene via ambulance.

“Everybody I saw taken to the ambulance — they were all kids. I looked out my window and saw a whole bunch of people scurrying, so I came outside.

“For someone to just shoot into the garage full of kids, that’s kind of heartless. You want to call it heartless, but you know they are not old enough to know what heartless is.”

With all due respect to Mr. Bolden, of course, they were old enough to know what “heartless” means. If not, how about common sense? Who thinks shooting up a garage full of kids is an “okay” thing to do? Including the shooting of a 12-year-old girl?

“We will not stop,” Sheriff Tregre insisted. “Somebody’s gotta come forward. This cannot just go on like this.” But it does “go on like this,” sheriff. On a daily basis. Walk around the bloody streets of Chicago’s Southside and ask a few questions; you’ll see what I mean.

Nine black children shot at a birthday party by a black gunman, and not one of the more than 60 people in attendance at the party would cooperate with the police. Not one person would make a formal statement to try and help capture the black individual who opened fire and shot nine black children.

File this in the “Black Lives Don’t Matter to Other Black People” drawer.