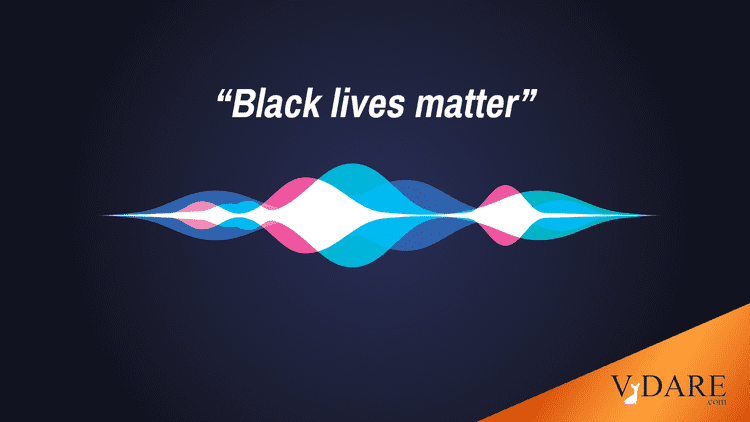 Not From the Babylon Bee: “Alexa, Siri and Google Assistant Voice Support for Black Lives Matter”

Tech companies like Amazon, Apple and Google have pledged donations to racial justice in the wake of George Floyd’s death, and are also using their voice assistants to spread awareness of the Black Lives Matter movement. They also respond to “all lives matter,” a phrase often associated with criticism of the BLM movement. …

“All lives matter. However, black lives are disproportionately in danger in the fight against systemic racism and injustice,” it says, with the same links.

When Apple’s Siri is prompted with “Black Lives Matter,” the answer is “Yes, they absolutely do” with a link to the site. Saying “all lives matter” results in the assistant telling you that that the phrase is a common response to Black Lives Matter, “but it does not represent the same concerns” followed by the link.

Google Assistant responds to “Black Lives Matter” with an explanation of the movement’s message.

“Black people deserve the same freedoms afforded to everyone in this country, and recognizing the injustice they face is the first step towards fixing it,” it says.

Asking the search giant’s assistant if “all lives matter” prompts it to offer a counter argument.

“Saying ‘Black Lives Matter’ doesn’t mean that all lives don’t. It means black lives are at risk in ways others are not.”