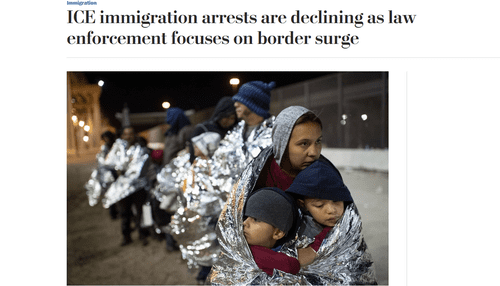 Not Only Is The Border In Meltdown, ICE ERO Interior Enforcement Is Collapsing

The intimidation of Deportation Officers by alien smugglers and others aiding and abetting illegal aliens is in high gear and U.S. Immigration and Customs Enforcement (ICE) Enforcement and Removal Operations (ERO) managers are acquiescing in the intimidation and interference.

The number of immigrants arrested by U.S. Immigration and Customs Enforcement agents is falling, according to agency statistics released Thursday, the latest sign that a border surge is diverting enforcement efforts away from the U.S. interior, dealing a blow to the Trump administration’s deportation goals.

Arrests by ICE agents fell 12 percent to 34,546 between Oct. 1 and Dec. 29 of last year, the most recent period for which data is available. Though deportations by ICE rose 10 percent during that period in comparison with the previous year, the increase came from soaring numbers of detentions at the border — not as a result of more arrests by ICE in the U.S. interior.

Nathalie Asher, a senior ICE official who coordinates detention and deportation operations, said an “explosion” of people crossing the border has forced ICE to reallocate resources.

Lady DACA’s border meltdown has directly caused a similar collapse in interior enforcement.  It was almost as if Lady DACA planned it that way, possibly in collusion with Javanka.

On to the saboteur Thomas Feeley.  He is now prohibiting his Deportation Officers from effecting arrests of illegal aliens and those who illegally aid those aliens, a violation of Title 8 United States Code (USC) Section 1324, Bringing In and Harboring Certain Aliens,specifically section (a)(1)(A)(ii):

In a sad spectacle, two of Feeley’s Deportation Officers stopped two illegal aliens and a US citizen named  Bryan MacCormack, who was illegally transporting those two aliens.none were arrested because Feeley has ordered his officers to not make such arrests if there is any resistance, even if verbal, and not to arrest those interfering as well, a violation of Title 18 USC 111, Impeding Federal Officers.

Bryan MacCormack says he knew what to do when ICE officers pulled him over with paperwork in hand: Read the fine print.

MacCormack says he was driving two undocumented immigrants who’d just had a court hearing in Hudson, New York, when the officers stopped his car. They showed him a document through the driver’s window.

The ICE officers called it a warrant. MacCormack told the officers something was missing: a judge’s signature.

A video showing part of the March 5 verbal standoff was widely shared on social media this week. And advocates are pointing to the exchange as an example of how “know your rights” lessons, which immigrant rights groups have been teaching across the country, are working.

[ICE Officers Stopped His Car. Then He Stopped Them From Arresting Anyone Inside, by Catherine E. Shoichet, CNN, March 30, 2019]

What MacCormack says about the arrest warrants is not true. Specifically, a Form I-200, Warrant of Arrest, can be executed by any immigration officer in any public area without any judicial warrant.  In fact, an immigration officer can make an arrest without any warrant, in relation to an illegal alien, or, as in this case, based on probable cause that a Federal crime has been committed, either in his presence or otherwise, in this case for impeding a Federal officer.

An immigration officercan also initiate a stop and interrogation of any person based on reasonable suspicion, called a Terry Stop.  Those Deportation Officers could also have used any reasonable force to make the stop and detain MacCormack.

But Feeley is more interested in protecting illegal aliens that making arrests, especially if local politicians and activists give him instructions not to.

US Immigration and Customs Enforcement says officers left the scene that day because someone interfered with their enforcement efforts.

“During an attempted targeted enforcement action March 5, in which ICE deportation officers specifically sought two unlawfully present foreign nationals, an individual interfered with the enforcement action, causing officers to instead depart the scene to avoid further disruption,” an ICE spokesman said in a statement.

“Individuals who intervene in or seek to impede ICE officers while they are carrying out their mission recklessly endanger not only the enforcement personnel, but also the individuals targeted for arrest and potentially innocent bystanders,” the statement continued. “Those who engage in such actions expose themselves to potential criminal violations, and run the risk of harming the very people they purport to support.”

Standard operating proceedure for Feeley seems to be that officers give up with any refusal or resistance from criminals and illegal aliens.  It's a far cry from the old days when all three would have been cuffed and stuffed.  And here is what MacCormack did.  He called local politicos and activists to come and interfere with the arrest.

MacCormack says the officers eventually left without making any arrests after an attorney, local elected officials and other supporters gathered at the scene.

Your humble correspondent warned that this would be a problem in the future if nothing was done about it.  [In The Streets And The Courts, The Left Plans A Coup. But Trump Can Fight Back, by Federale, VDare, February 14, 2017]  The Trump Administration is now reaping the whirlwind due to its failure to nip this resistance in the bud when it had a chance two years ago.

What it can do now is arrest MacCormack and others like him who openly aid illegal aliens.  It can also fire Feeley, Perez, Macias, and Lady DACA.  Personnel is policy.