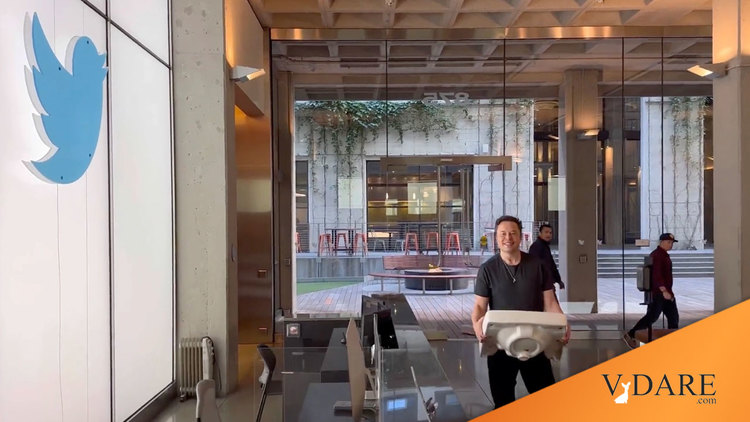 For the first time in a while, it seems like the good guys are trying to win and not virtue signal to the left. Play by their rules in a game they have rigged, you’ll always lose.

Havoc ensued shortly after the Tesla CEO acquired the popular social media company earlier this month. Thousands of staff members across Twitter’s global team have since been fired, many without notice. Unfortunately, some staff members are feeling the brunt of Musk’s chaotic acquisition, like Twitter staff in Ghana, who were let go the same day the company opened its headquarters in Accra. As NewsOne previously reported, it’s still unclear as to whether Musk offered severance pay to those impacted in Africa, which is quite odd, given that termination pay was offered to laid-off Twitter employees in India and other team members around the world.

In a scathing report published by the New York Times on Nov. 11, several Twitter executives warned Musk to carefully assess his layoff plan for “diversity and inclusion issues,” so that the cuts would not disproportionately impact workers of color. But the South African businessman and his team “brushed aside the suggestion,” the report noted.

Following the move, laid-off Twitter workers in Ghana said they felt “insulted,” “discriminated against” and “disrespected” by the way they were abruptly let go by the company. Now, some staff members are seeking legal guidance from employment lawyers in Africa to assess whether Musk unlawfully terminated their contracts.

Sadly, Musk’s massive wave of company-wide layoffs continued this week. On Saturday, Casey Newtown, a tech reporter who writes for Platformer, broke the news that Twitter had “eliminated 4,400 of its 5,500 contract employees.” Newton tweeted that the cuts were expected to have a significant impact on “content moderation and the core infrastructure services that keep the site up and running.”

Axios also confirmed the news, noting how contract employees weren’t given notice about their termination. Many were made aware after they discovered they could not access their company email and other Twitter computing systems.

A few other departments were also hit by massive cuts

Outside of the company’s contract employee team, other departments were also harshly impacted by agonizing cuts. In Redbird, Twitter’s platform and infrastructure organization, Musk shed numerous managers. According to The New York Times, the unit lost about “80 percent of its engineering staff raising concerns about the company’s ability to keep its site up and running.”

One engineering manager reportedly “vomited into a trash can” after they were ordered to let go of hundreds of staff members. Additionally, dozens of product managers were laid off in Twitter’s consumer division with “just over a dozen” surviving the termination wave. Some of the company’s top executives were also laid off like Twitter’s chief executive Parag Agrawal and Ned Segal, who was the chief financial officer.

Without diversity and inclusion, Twitter should have already fallen apart. Right?

Say what you will, but Elon Musk is changing the world. Now just let Jared Taylor back on the platform!