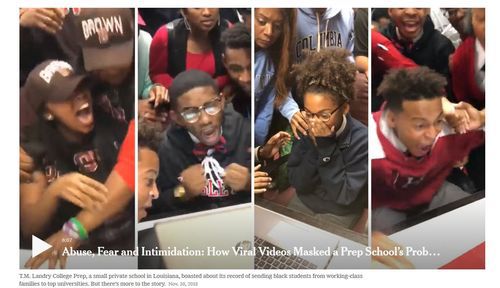 T.M. Landry, a school in small-town Louisiana, has garnered national attention for vaulting its underprivileged black students to elite colleges. But the school cut corners and doctored college applications.

A founder of T.M. Landry College Preparatory School described him as a “bright, energetic, compassionate and genuinely well-rounded” student whose alcoholic father had beaten him and his mother and had denied them money for food and shelter. His transcript “speaks for itself,” the founder, Tracey Landry, wrote, but Mr. Sassau should also be lauded for founding a community service program, the Dry House, to help the children of abusive and alcoholic parents. He took four years of honors English, the application said, was a baseball M.V.P. and earned high honors in the “Mathematics Olympiad.”

The narrative earned Mr. Sassau acceptance to St. John’s University in New York. There was one problem: None of it was true.

“I was just a small piece in a whole fathom of lies,” Mr. Sassau said.

T.M. Landry has become a viral Cinderella story, a small school run by Michael Landry, a teacher and former salesman, and his wife, Ms. Landry, a nurse, whose predominantly black, working-class students have escaped the rural South for the nation’s most elite colleges. A video of a 16-year-old student opening his Harvard acceptance letter last year has been viewed more than eight million times. Other Landry students went on to Yale, Brown, Princeton, Stanford, Columbia, Dartmouth, Cornell and Wesleyan.

Landry success stories have been splashed in the past two years on the “Today” show, “Ellen” and the “CBS This Morning.” Education professionals extol T.M. Landry and its 100 or so kindergarten-through-12th-grade students as an example for other Louisiana schools. Wealthy supporters have pushed the Landrys, who have little educational training, to expand to other cities. Small donors, heartened by the web videos, send in a steady stream of cash.

T.M. Landry College Prep, a small private school in Louisiana, boasted about its record of sending black students from working-class families to top universities. But there’s more to the story.

In reality, the school falsified transcripts, made up student accomplishments and mined the worst stereotypes of black America to manufacture up-from-hardship tales that it sold to Ivy League schools hungry for diversity. The Landrys also fostered a culture of fear with physical and emotional abuse, students and teachers said. Students were forced to kneel on rice, rocks and hot pavement, and were choked, yelled at and berated.

By the end of the article, it’s pretty clear that Mr. Landry suffers from that kind of black megalomania that probably doesn’t have its own DSM code, but seems to be a Thing.

His strategy, though, made a fair amount of sense: don’t teach much of anything other than ACT test prep and just make up transcripts, extracurriculars, and recommendations as needed to hoodwink college admissions departments. Then as your students get into Harvard et al, use their success to go out and recruit better students and more donations.

Landry was a little too crazy to pull this off successfully, but I bet a few now prestigious schools went through a fake-it-till-you-make-it phase in their pasts not unwholly like this.