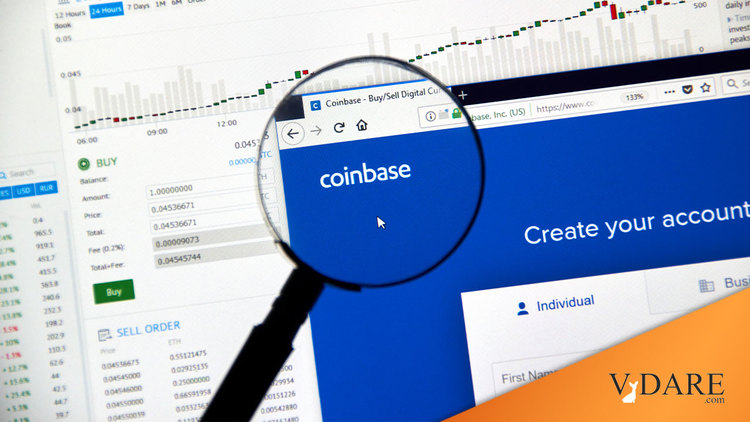 NYT Out To Get Coinbase For Crimethink

VDare.com note: Coinbase may not be woke enough for the NYT, but they have blocked us from receiving funds via their platform. See How To Use (And Donate!) Cryptocurrency for how to give anyway.

Back in September, the CEO of Bitcoin firm Coinbase, Brian Armstrong, issued a memo to employees telling them that their job was to do their job, not engage in social justice activism on company time. Not surprisingly, the New York Times has been out to get Coinbase ever since. How can we have a Great Reset if the Bad People can still use Bitcoin?

From the NYT news section:

An analysis of internal pay data at the San Francisco company Coinbase shows disparities that were much larger than those in the tech industry.

The fast-growing cryptocurrency start-up Coinbase has been rattled in recent months by tensions between executives and employees who said they were being treated unfairly because of their race or gender.

While management at the company has argued that the complaints were limited to a handful of employees, Coinbase’s own compensation data suggests that inequitable treatment of women and Black workers went far beyond a few disgruntled workers.

The data, recently obtained by The New York Times, indicated that women at Coinbase were paid an average of $13,000, or 8 percent,

less than men at comparable jobs and ranks within the company, according to an analysis of the figures, which included pay details for most of Coinbase’s roughly 830 employees at the end of 2018.

… None of the manager groups overseeing engineers had more than two women in it so all manager categories are ones overseeing non-engineers.

The picture was also unequal for the 16 salaried Black employees in the data. They were paid $11,500, or 7 percent, less than all other employees in similar jobs.

I did a text search on the article about how much the tech company pays blacks and whites for the string “Asian” but for some reason, Asians aren’t mentioned. After all, who ever heard of a Silicon Valley company employing Asians?

The pay disparities at Coinbase appear to be much larger than those in the tech industry as a whole, and at the few other tech companies that have had to release data.

Presumably, all this underpaid black and female talent at Coinbase will walk out the door tomorrow and start their own company. To not do so would be to leave a billion dollar bill lying on the sidewalk.

The Coinbase analysis was conducted for The Times by Alexandra Marr, an economist who has provided statistical analysis for court cases involving pay bias. When she factored in stock options for Coinbase’s employees — often an important part of pay at start-ups — the compensation for women and men was roughly the same while the gap between white and Black employees grew to 11 percent. …

The pay disparities are likely to add to tensions at the San Francisco company, which is riding a boom in the value of cryptocurrencies like Bitcoin. It recently told regulators it intended to file for an initial public offering.

Numerous Black employees at Coinbase recently publicly complained about the discrimination they faced at the company. Several women who work at Coinbase have also complained internally about how they were hired, paid and promoted, according to company documents and five employees with knowledge of the complaints.

Well, there you have it: some blacks and some women complained.

By the way, what examples are there of firms that prospered by hiring discriminated-against blacks and women?

The best examples I can think of are in baseball: after Branch Rickey brought Jackie Robinson up to the Brooklyn Dodgers in 1947, the Dodgers went to the World Series six times in ten years, with 3 black Dodgers winning 5 Most Valuable Player Awards (Robinson, Don Newcombe, and three for Roy Campanella). In the American League the only teams to break through the Yankees’ monopoly on the pennant were the Cleveland Indians (1948 and 1954) and the Chicago White Sox (1959): both teams that hired a lot of African-Americans and black Latins.

The baseball examples are pretty clear because you had two teams that resisted integrating, St. Louis and Boston, who had met in the 1946 World Series but didn’t get back to the World Series until the 1960s, wasting the rest of Stan Musial’s and Ted Williams’ careers. On the other hand, the dominant Yankees were almost as slow to integrate and kept going to the World Series routinely through 1964.

Can anybody think of a firm that got a major jump on its competition by hiring women?

My guess is that society flipped so quickly on women that few companies were a pioneer in employing lots of women for very long.

Speaking of Bitcoin, that reminds me that I’m wrapping up my third fundraiser of 2020.