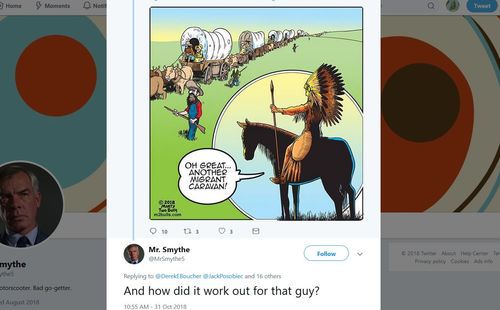 "Oh, Great, Another Migrant Caravan"—American Indians Should Have Worried More

What it brought to mind was George Macdonald Fraser's Flashman And The Redskins, in which the British anti-hero Harry Flashman visits the US in 1849 and 1876, being involved in both the '49er wagon trains to California, and the Battle of Little Big Horn. 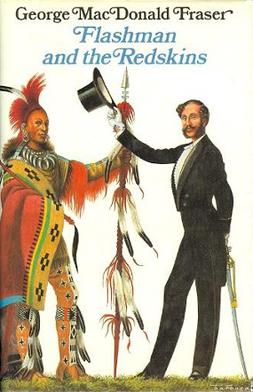 The Indians didn't believe, when wagon trains started to cross the plains, that there were that many white people. Here's what Spotted Tail, the Brule Sioux tells Flashman in 1876.

"Is it enough? It is enough. I have seen the white man's world now, the fire-canoes and iron horses, the great tipis that touch the clouds, the lodge where fair young maidens guard the Great Father's gold, the cities where the people are like ants.” He grinned in embarrassment.

“Once I thought they sent the same white people after us from city to city, to make us think they were more numerous than they are; now I know that in New York every day more people come from far lands than would make up the whole Lacotah nation. Can Spotted Tail's lance and hatchet hold back all these? No. They fill the land, they sweep away the buffalo, they plant seed on the prairie where I ran as a young boy, they make roads and railways over the hunting-grounds. Now they will take the Black Hills, the Pahasappa, and there will be no free land left to the Indian.”

He broke off to roar “Joll-ee good! Pudden!” as the waiter set about a gallon of ice-cream before him, which he sank as smart as you like and waved for a second helping."

I should say that this being 1876, not 1849, the English soldier (fictional) and the Lakota chief (a real historical character) are having dinner in the Grand Pacific Hotel in Chicago.

Author Fraser was always careful with the real historical aspect of his fiction, though. The Lakota really had no idea how many whites people there were, or  how big a threat they were facing.

Spotted Tail and many men of his group had won renown in this Pawnee war, and they were filled with pride and confidence in themselves and their people. Ignorant of the world outside their own little orbit, they were confident that they could defeat any foes, including the white people. Indeed, many of these Sioux warriors looked down on the whites, regarding them as inferior to the Pawnees. After all, the Pawnees had many good warriors among them; but the mass of these white emigrants who were pouring westward up the Platte road were obviously not warriors at all. Most of them did not even have horses. They used cows (ox teams) to haul their long trains of white-topped wagons, and even the white soldiers who now occupied the old trading post on Laramie Fork, to guard the emigrants against Indians, had very few horses. The Sioux warriors regarded with contempt these infantry troops. What could walking soldiers do in a fight against mounted warriors?

The answer to that involved  not only rifles, but civilization.   The ancient Roman legions could have beaten the Indians, too.

But the Indians had an excuse for being  naive about demographics, modern Americans don't.

Here's Darren Beattie on how many "caravans" there are a year in entering the US:

Americans should be more worried than they are.