On His Netflix Comedy Special, Chris Rock Calls for the Shooting of White Children (So White Mothers Will Cry)

Previously on SBPDL: The Mask is Slipping: Michael Eric Dyson Calls for the Killing of White Children

There's not much else to say, except to rehash a harsh reality touched on a few years ago: The mask is slipping faster and faster. .

Every moment that passes, each second that ticks off of the clock, the mask gives way to an ugly truth most people never want to confront. 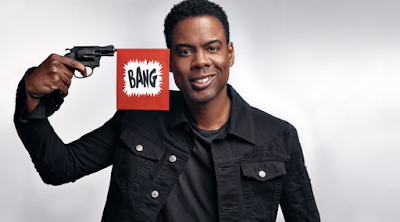 Like Dorian Gray's hidden portrait, this mask has repressed a truth so vile, so macabre, few people will be able to stomach it when they see it.

It will knock them over.

Many will turn their head at the horror; but like a gruesome car crash, it's only natural—instinctive—to want to take a look.

It's Chris Rock's turn to show us this image.

Everyone Will Be Talking About Chris Rock's New Netflix Special, Esquire, February 14, 2018

It's been a shitty few years for America, years when Chris Rock's hilarious outrage was not only needed, but necessary. While we haven't seen much of him—he's been dealing with a messy divorce recently—he has been around in subtle ways. He appeared in an essential post-election SNL sketch detailing that infamous November night in 2016. He helped Aziz Ansari craft a powerful SNL monologue, and he made a few late-night appearances softening our Trumpian reality.

But Tamborine, his surprise new Netflix special, gets everything out that's happened to Rock and the country recently. It's more of a therapeutic release than anything else, and if you're in the mood to just release it all with a grin, then Tamborine is crucial.

After a fitting and brief opening to Thundercat's "Them Changes"—"Nobody move, there's blood on the floor"—Rock makes his statement immediately. Here's his opening joke:

Ladies and gentlemen, the mask is slipping. Chris Rock has his knives sharpened. He has just—on Netflix—called for the killing of white kids.

A lot of white people have tried to make this experiment work; but when looking at the picture of race relations in America, a disturbing hidden pictures emerges. Rock just showed it to us.