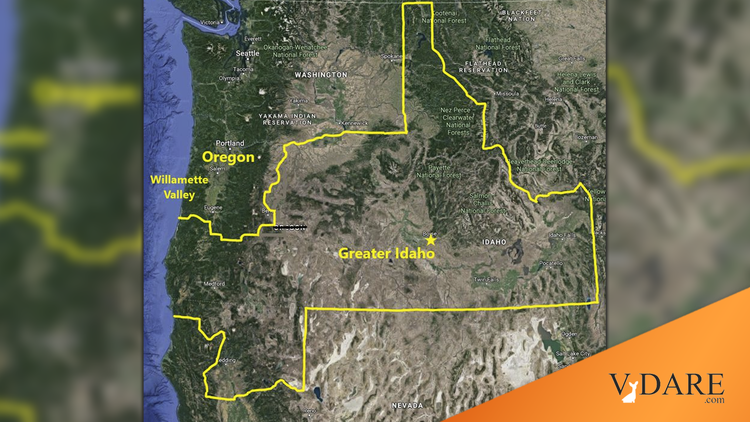 So, what does the future bring for those citizens of a state completely dominated by Leftist politics and Democrat-controlled state legislators and governors' office?

In states dominated by one major metropolitan area (think Chicago, New York City, Philadelphia, Northern Virginia, Portland, Seattle, Atlanta and Denver) turning otherwise solidly—or right-leaning—conservative states into Democrat strongholds, there are only three options: move; accept domination by the Left and stay put; or watch as individual citizens collectively push to secede to a state nearby more friendly to your politics.

More and more, the latter option is on the table:

People in two counties in rural Oregon voted to push their lawmakers to consider moving their communities into Idaho, which they say is more representative of their political views.

Oregon Public Broadcasting reports the chances of Jefferson and Union counties joining Idaho are slim as it would require votes by both Oregon and Idaho legislatures and the U.S. Congress.

Supporters have been working for several years to build momentum for shifting Oregon’s border to put some of the state’s more rural, and politically conservative, counties to Idaho.

They say that, because state politics are dominated by more populous - and more politically progressive - communities along the Interstate 5 corridor, large swaths of the state are ignored. [2 Oregon counties continue push to join Idaho: Residents in two rural counties want to move their communities into Idaho, which they say is more in line with their political views., Associated Press, November 15, 2020]

Call this a huge white pill out of Oregon, and a reminder of people living in California, Illinois, New York, Pennsylvania, Georgia, Virginia, Washington, and Colorado should be thinking. Just imagine a push by citizens of North Georgia to secede from the growing control diverse Metro Atlanta has over the state, and become part of Alabama or Tennessee?

Same with the entire state of Virginia, outside of Northern Virginia, with a push to join West Virginia.

Nothing is impossible in politics, and as we see in Oregon, people yearn to be free of the vise major metropolitan areas have on the entire state.