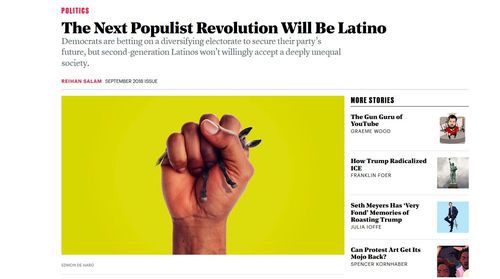 Reihan Salam: "The Next Populist Revolution Will be Latino" (Spoiler: It Won't)

The Next Populist Revolution Will Be Latino

Democrats are betting on a diversifying electorate to secure their party’s future, but second-generation Latinos won’t willingly accept a deeply unequal society.

Immerse yourself in the pro-immigration literature of Democratic Party thinkers, and you will notice a curious pattern of argument: High levels of immigration have awakened the racism and bigotry that have fueled the rise of right-wing populism, but it is nevertheless best to press forward with the policies that have ostensibly produced this fearsome reaction. Why? Because slowing the pace of immigration would be a callow surrender to bigotry. But also because, in the fullness of time, a unified coalition of college-educated white liberals, African Americans, and working-class immigrants and their descendants will vanquish the aging rump of reactionary whites.

… The promise of the rainbow coalition thus seems ever closer to fruition. Among true believers, every liberal defeat, up to and including the 2016 presidential election, is best understood as little more than the dead-cat bounce of white resentment politics.

Confident pronouncements about the coming triumph of the liberal coalition tend to neglect an awkward question, however. Who will be in control of this bloc when it finally achieves its inevitable victory? Will it be college-educated white liberals, who play such an outsize role in shaping the left’s ideological consensus today, and who dominate the donor base and leadership of the Democratic Party? Or will it be working-class Latinos, whom white liberals are counting on to provide a decisive electoral punch?

Are working-class Latinos in control of all that many Latin American countries?

In the age of Donald Trump, college-educated white liberals consider right-wing white populists in small towns and outer suburbs to be the gravest threat to their values and, sotto voce, their power and influence. Many seem to assume that rainbow liberalism will remain deferential to the demands of avowedly enlightened, well-off people like themselves—yielding a future in which student loans for graduate degrees are forgiven, property values in gentrified urban neighborhoods and fashionable inner suburbs are forever lofty, service-sector wages never quite rise to the point where hiring help becomes unaffordable, and, of course, rural white traditionalists are banished from the public square.

But what if working-class Latinos aren’t especially interested in serving as junior partners in a coalition led by their self-proclaimed white allies? What if they instead support new forms of anti-establishment politics, rooted in grievances and vulnerabilities that place them at odds with liberal white elites?

And that is going to happen how?

Consider a genuinely bright and talented Latino: Lin-Manuel Miranda, composer and star of Hamilton. As far as I can tell he comes from a family with roots in the (perhaps rightwing) nationalist movement in Puerto Rico, the people who feel like they ought to be running the place. But his dad was in New York and became head Puerto Rican vote wrangler for centrist Democratic mayor Ed Koch. Lin-Manuel went to Wesleyan and had the wit to make a hip-hop star out of a reactionary Wall Street lawyer as being the perfect icon for today’s big money yet woke Democrats. Now he’s living a kick-ass life.

So, why be a populist when you can be the toast of Broadway and of Wall Street and of the Beltway?

Who is going to stay a populist when both parties’ elites are desperate for anybody whose name ends in a vowel who has any charisma?

And of course there aren’t that many Mexican/Central American working class people with all that much charisma in the first place.

On the other hand, the Democrats’ ever growing sacralization of blacks might eventually turn off lesser elements of their coalition.